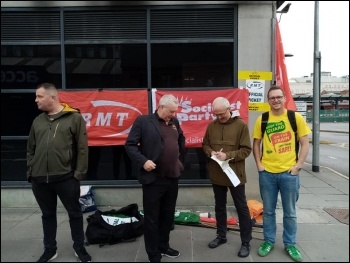 RMT East Midlands Railway train guards have started a new series of strikes in their long-running dispute about pay cuts for new staff and safety concerns. The strike of senior conductors on EMR Intercity over staffing and safety is also continuing.

Picket lines continue each Sunday morning at Nottingham and Kettering.

Talks took place between RMT reps and EMR management. Although management had said that they had set aside two weeks for negotiations, one of the managers concerned is on leave for a week and spent two days in London for the National Railway Awards.

Despite this, one manager has now said that they will not talk to the RMT because more strike dates have been set. He says that the strikes should be called off for talks to take place. Apparently, this is management being committed to settling the dispute with RMT. Nevertheless, there are more talks taking place next week.

The strike remains solid, with no one crossing the picket line at Nottingham.

It seems to be getting harder for EMR to get managers to volunteer to run trains on strike days. Even more trains were cancelled than on previous strike days, and EMR was also having problems hiring sufficient replacement buses. Passengers were advised that if they could not travel today, their tickets would be valid tomorrow.

RMT has demands for the talks. If a resolution is not reached, then they will look at escalating the action and striking on another day in the week as well.

Strike dates have been called on Sundays from 17 October to 21 November. The current ballot (the second) is valid till December.