Work and education are being closed to us 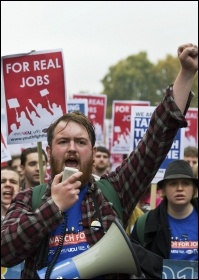 The Youth Fight for Jobs (YFJ) campaign was relaunched in Yorkshire at an online public meeting on 17 September, in anticipation of the end of the furlough scheme. This is ahead of the Yorkshire Youth March for Jobs in Leeds on Saturday 9 October.

The meeting heard why the campaign is vital for young people. Around one million workers are expected to lose their jobs when furlough ends, many of them young. Speakers included Hull branch secretary of Unite the Union, Alex Hutchinson, the Yorkshire and Humber rep for young members of civil service union PCS, Melissa Newman, and Leeds Gets Organised project worker, Jamie Rodney.

Kat Gwyther, Leeds Youth Fight for Jobs, chaired the relaunch. She said: "With the government's furlough scheme expiring at the end of the September, youth unemployment is set to grow, especially as avenues like education become closed to some students. University of Leeds is offering students money to defer courses, and University of York is 'offering' students accommodation almost 50 miles away in Hull!

"There are stories of large numbers of vacancies in many sectors, but lots of these require specialist training for which there is a lack of affordable and adequate provision. Youth Fight for Jobs is fighting for a decent job, education or access to quality training for all young people. We will be taking our message to the streets of Leeds on 9 October."

Youth Fight for Jobs was originally launched in 2009 following the rise of youth unemployment after the 2007-08 financial crisis. YFJ organised a 330-mile march, along the lines of the Jarrow Crusade, to mark its 75th anniversary, and raise the need for measures to tackle youth unemployment. YFJ has been at the forefront of the campaign against the exploitative nature of zero-hour contracts, and has supported drives to unionise workers in McDonald's, Wetherspoons, and elsewhere.