Climate change and the profit system to blame 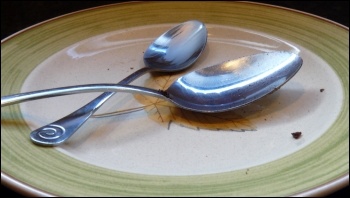 The problems that climate change will pose for food production are already being felt in Madagascar. The country's south has faced four years of back-to-back droughts which have wiped out harvests. As a result, the country is facing a severe famine - one of the first in the world that the United Nation's World Food Programme is calling 'a direct consequence of climate change'.

People have been relying on raw cactus fruit, seeds and locusts to sustain them, as this is all they can find to eat, in a situation that is due to get worse. The number of Madagascans facing extreme starvation is predicted to hit 1.3 million at the end of this year. The unequal effect of climate change, where countries with little wealth and which produce little CO2 will see the worst impacts of the warming planet, is laid bare.

The devastating extreme heat in the country will only worsen as the planet warms further, and it is only through a socialist planned economy that we can really alleviate the threat of climate change. In order to move climate heating industries to zero-carbon emissions we need democratic international planning and investment.

To do that we need to eradicate the market-based system which is concerned only with short-term profits, and takes no account of non-monetisable factors like climate or pollution. Even capitalist economists talk of the 'market failure' inherent in the capitalist system, which will therefore never allow us to reach zero-carbon.

Socialism means removing the profit motive, and allocating resources democratically on the basis of need. Under socialism, the environment would be respected, and production would be organised to ensure what we create is geared towards meeting needs.