Join the fight for socialism 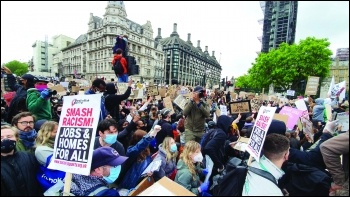 This generation of young people is going to be worse off than our parents. In workplaces, young people are facing brutal and continuous attacks on our pay, terms and conditions. On the campuses, students are facing extortionate tuition fees and rent, course closures and a future wracked with debt. The immediate future for the young working class is looking progressively bleaker. And this is dependent on whether we actually have a future - something which is increasingly called into question with the climate crisis now well and truly upon us!

If we want any hope of a decent future, students and young workers must fight back. This is the message the Socialist Party will be taking into the schools, colleges, universities and workplaces over the next few weeks.

The Youth Fight for Jobs day of action on Saturday 9 October will send a very clear message that young workers will not be the ones to pay for the crisis caused by capitalism. Youth unemployment, underemployment, bogus training schemes, exploitative contracts and detrimental youth rates are burdens we are no longer prepared to bear.

Meanwhile as university terms start, none of the issues that drove students to take action through rent strikes last year have been resolved. In fact, with talk of lowering the threshold for tuition fee repayments and course cuts already underway, the situation for students looks likely to get worse. We will be at university freshers fairs, calling on students to join us, to get organised and fight back for free education.

Linked to all of this is our demand for socialist change, not climate change. Intrinsic to our demand for jobs for young people is the demand for a mass programme of socially useful and environmentally friendly job creation. We call for a democratically controlled, publicly owned education system that prepares young people for work within sustainable industries.

The capitalists are unprepared to invest in a future for young people, and unwilling to take the steps needed to solve climate change. That is why on the climate strikes on the 24 September and at COP26 in Glasgow in November, we will be calling on students and young people to join the fight for socialism now, in order to provide every young and working-class person with a decent future. If there ever was a strong case for a socialist transformation of society, it is now.