A cruel cut to the loan payback threshold 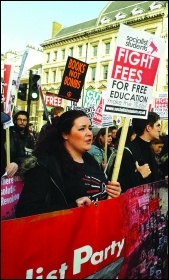 In another determined effort to take money off the working class to pay for the pandemic, the government is set to slash the threshold at which students pay back their loans. No details have been revealed yet, but in 2019 the Augar review demanded a threshold of £23,000. Lowering the threshold from the current £27,295 will hit the pockets of tens of thousands of graduates every year, already facing a national insurance hike when they go into work. Bear in mind a £23k salary is still below £12 an hour working full time.

The Tories want to put this change across as an act of 'fairness', because they say taxpayers are paying for higher education rather than graduates. Let's be clear, this is an excuse for getting an estimated £2 billion out of graduates. If it were about fairness, the Tories might look at the Sunday Times Rich List. Taking that £2 billion off the richest man - Sir Leonard Blavatnik- would still leave him with a £5.2 billion gain this year!

The second Tory excuse is that this is part of the 'levelling up' agenda, because it will push more young people into technical and vocational training. To quote the Financial Times: "The government believes too many students are racking up debts studying 'soft' three-year university courses in arts and social sciences".

That's not levelling up. With wealthy graduates paying their loans up-front, this move will mainly push lower-income working-class youth away from university. Tory ideology comes through clearly: youth from wealthier backgrounds can study what they like, but working-class youth should study only if it's profitable for capitalism.

What also comes through clearly is that the tuition fees model is an absolute failure. The fees system, started by Blair and expanded by the Con-Dem coalition, tried to get more money out of young workers, who were falsely sold the idea of university leading to a good well-paying career.

Many of Britain's 14 million graduates are in entry-level, low-paying jobs, and the bosses aren't prepared to change that. The fight for free education and for real graduate careers must come from the student and wider workers' movement. The trade unions should oppose this threshold change and stand with students in reinforcing that important demand for free university education.