"We are the ones who can change things" 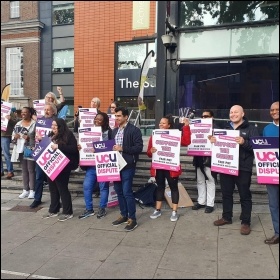 Workers at CONEL college in north London   (Click to enlarge)

University and College Union (UCU) members at 13 colleges across England began strike action on 28 September in a dispute over pay. The union is demanding a pay increase greater than 5%, after college workers were yet again offered a real-terms pay cut.

At the College of North East London Tottenham campus, workers walked-out as part of the 13-day strike, and as part of the the capital city colleges group, which is also taking action over workload, holiday pay and a new assessment regime.

Further education workers are experiencing all of the same problems of marketisation as higher education. As one striker put it: "When management see students they just see money, we see potential". Another, who later asked to join the Socialist Party, put it best when he said: "Short termism and profit is what matters to them. We have to change that through strikes, protests and education. Some people know there is a problem but think they aren't the one to address it, they are waiting for a messiah. But that is us, all of us have something to contribute. We are the ones who can change things".

Solidarity with all other further education workers taking action. We in higher education might be joining you on strike this term as we collectively fight back over marketisation and austerity.