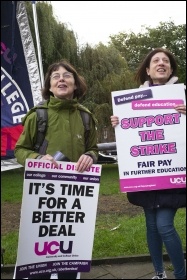 Everyone we spoke to was angry about the measly 1% pay offer - a real-term pay cut - especially as they were working longer hours and with a higher workload than ever before. At City and Islington College, workers told us: "We feel very strongly. It's not just about the pay, but the devaluing of our work, the workload and the restructures."

We spoke to Elena, Korina, Inci and Anne on the Enfield college picket line. They told us: "The working conditions have got worse. There's no time to prepare anything extra or new. We've got extra workload with no extra pay. Prices are rising faster than our pay. It's really stressful".

"We just want fair pay for the work we do. We just want to afford to live. I love my job and the students, but there's so much workload, so much we have to do outside of working hours."

"For me, workload is a big issue. The PCs, the whiteboards, nothing works properly. There's no time to do your job. One day there weren't enough chairs. I have to come in one-and a half hours earlier to get things done. The students are great, and there's a good team of staff here. We want to be happy in our job. We don't want to be stressed all the time."

As one picketer said: "We know it's all connected, the petrol shortage, the low pay, the workload... it's the accumulation of wealth by the few that is affecting the mass of people and families are really struggling."