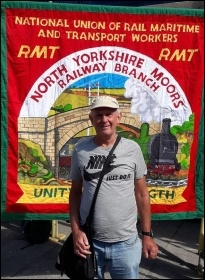 Comrades in the Northern Region were shocked to learn of Dave Hardaker's sudden death on Wednesday 29 September.

Dave was a long-time active Socialist Party member and supporter, joining with Militant (forerunner of the Socialist Party) in 1981. He was an active member, and was the secretary of Militant supporters in the South Durham area in the 80s and 90s.

Dave was well known as an active socialist in his home town of Newton Aycliffe, to the extent that he was targeted by members of the British National Party, attacked, badly beaten, and hospitalised in 1994. The attackers were eventually jailed. The attack did not deter Dave, but made him more determined to fight fascism and for socialism.

An active trade unionist, Dave was a branch secretary in a CPSA, and later PCS, DWP branch. Dave took early retirement from the Job Centre after a vicious campaign of victimisation against him, because he failed to meet his 'target' of suspending claimants' benefits: a battle Dave won.

Dave remained active as secretary of Spennymoor and Newton Aycliffe Trades Council; a member of the PCS ARMs regional branch, and volunteering for the North Yorkshire Moors Railway, where he also joined the RMT union.

Dave had an active life with many interests: chairperson of Darlington Ramblers Association; committee member of Friends of the Stockton and Darlington Railway; CAMRA member; volunteering for Citizens Advice. He remained a Labour Party member and was a long-standing local councillor on Great Aycliffe Town Council. Dave was also a prolific traveller and was always out and about.

On top of this, Dave remained an active socialist campaigner, still selling an average of six copies of the Socialist each week. He was always out on the streets supporting Darlington Trades Council's activities. Just days before his death, Dave delivered Martin4DGS leaflets to most schools in Newton Aycliffe, including the primary school he attended as a child.

Dave will be sadly missed by all his comrades.