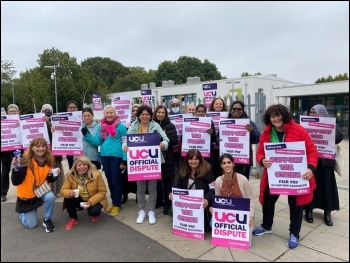 University and College Union (UCU) further education college strikes have continued into their third week at five colleges, in an ongoing dispute over pay and conditions.

The branches involved have already taken five days of action as part of the escalating action, and started a further five days on the week commencing 11 October.

Socialist Party members have again joined picket lines and rallies to offer solidarity with workers, as well as to discuss the strategy and way forward for the strikes.

The mood of the strikers we spoke to was determined, and the negotiating team at the Capital City College Group have agreed to call further strike dates if management do not concede to their demands.

Though the strikes have been coordinated, negotiations are taking place on a college-by-college basis, with some deals already struck. Action has been suspended at four colleges which form part of the South Thames College group, as negotiations were deemed to have made sufficient progress.

That leaves Croydon, Lambeth and the Capital City Colleges group (which includes City and Islington College, Westminster Kingsway College and the College of North East London) still in the action. All colleges are taking action over pay, seeking at least a 5% pay rise. Members who are part of the Capital City Colleges Group are also in dispute over workload and a punitive teacher assessment policy.

Further dates could also coincide with university strikes, which would be an important step forward in developing a fighting strategy against marketisation, coordinated across the further education and higher education sectors.

Additionally, if further action is called, the strikes will be strengthened by co-ordinating with other public sector workers fighting on pay.