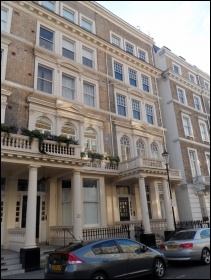 The Pandora papers have further revealed capitalism's parasitic nature. Britain's housing crisis is shown to serve as a lucrative venture for the super-rich. The investigation revealed that 1,500 UK properties have been bought by offshore firms, totalling an estimated value of £4 billion, mostly in London.

These owners include UK political donors, high profile foreign politicians, and individuals accused of corruption. These 'revelations' aren't exactly surprising, since the super-rich have been buying up high-end property in London at ever-increasing rates, as the wealth of billionaires has soared by 35% during the global pandemic.

Meanwhile, the UK housing crisis is severe and set to get worse. The number of households in the private rented sector has increased by 1.7 million from 2007 to 2017; with 25 to 34-year-olds representing the largest group - 35%, giving credence to the phrase 'generation rent'. Many, unable to afford to move out, stay living with family into their 30s.

Shifting focus towards London paints an ever gloomier picture. Many workers can no longer afford to live in the capital, as seen by recent research by the Royal College of Nursing showing 57% of nurses plan to move out of London. Furthermore, homelessness in London is rapidly rising, with the number of rough sleepers tripling from 2010 to 2018.

With the crisis deepening and the mainstream political parties offering no solutions, there are those who are resisting. This includes Lewisham bus driver Anthony Braithwaite who is standing his ground against eviction by a Labour council. Socialist Party members have been among those campaigning with him.

It is only a socialist programme that can defeat the housing crisis in London and elsewhere, including democratic rent controls, the mass building of decent council homes, and an end to evictions. Property speculation has driven the number of long-term empty homes in London over 30,000. We say, take this property out of the hands of the super rich and use it to house those who need it.