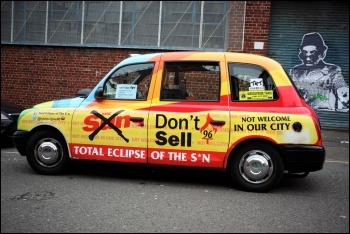 The likelihood of politics coming up on a cab journey is nearly guaranteed. I mainly see workers, dozens of times a day.

They're affected by community issues, working conditions and the political climate. I have the chance to offer a socialist perspective that people may never have had access to.

I get to endorse anti-austerity election candidates and contest stereotypes. When I challenge a lazy vote for Labour, or raise an anti-cuts alternative, the curiosities appear.

Workers, who are overworked and underpaid, appear disillusioned with the political landscape, only visiting it every other May, if they vote at all. Election turnout is a paltry 20% in lots of places.

I have managed to get socialist views out there, and counter the right-wing populism which is infesting communities. I've helped workers see a different way - rejecting bigotry and prejudices, uniting the working class to rise up and make a difference.

I have been able to offer the Socialist newspaper and leaflets on local issues to passengers willing to know more. I am currently selling 20 copies of the Socialist every month. The hope is that we can raise the political awareness of the community.

During lockdown, I have been the link to the outside world for many older passengers. I would be the only person some had seen for weeks. People took a socialist paper as it was the only socialist analysis they could find.

The pandemic forced people to reflect on their lives and livelihoods. They were willing to talk politics in a way they'd never have dreamt. They have felt the effects of austerity, and now they are feeling the effects of a precarious future of Covid austerity.

During lockdown people would ask if I had any socialist papers. Passengers now recognise me and say: "You're that socialist cabby, aren't you?"