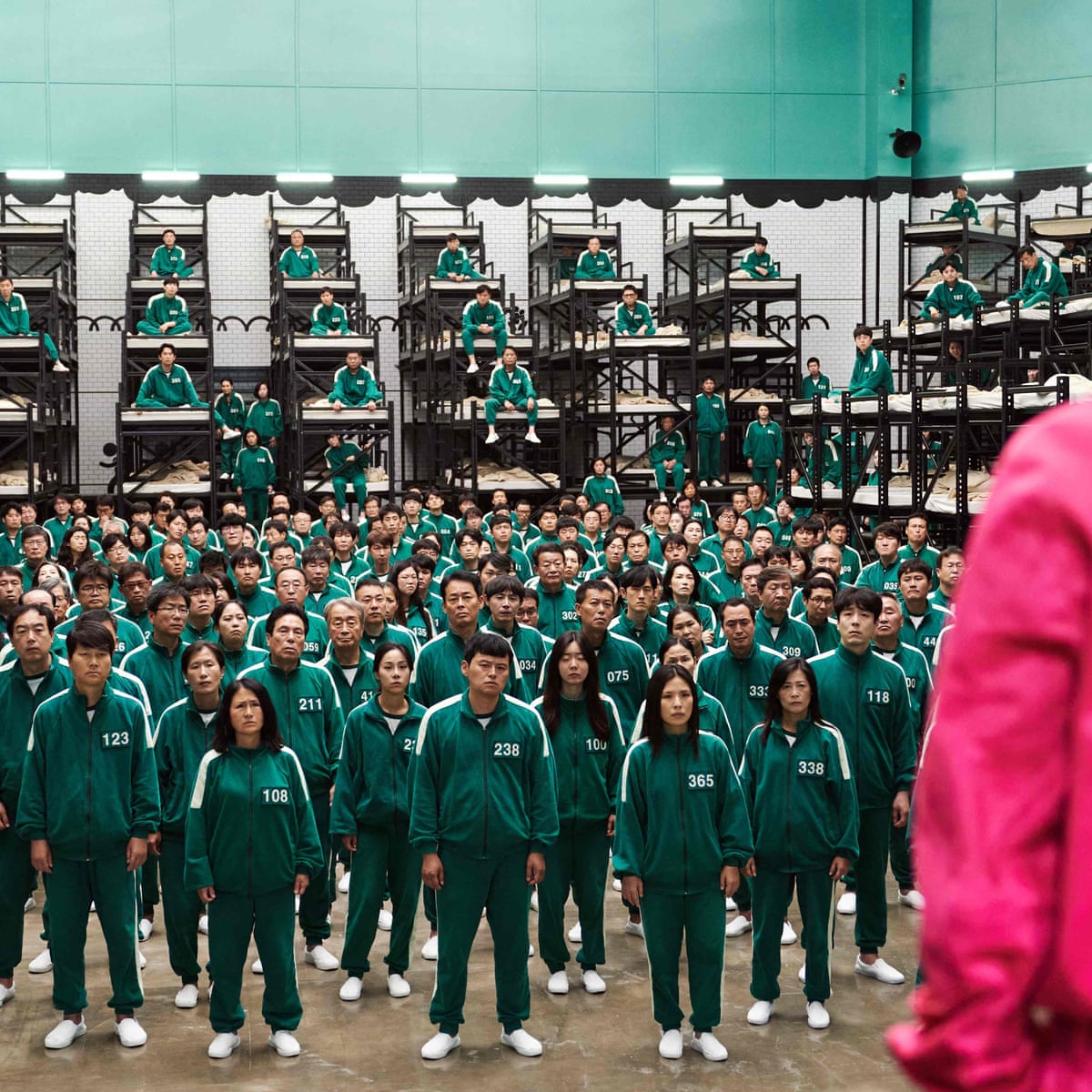 ‘An unflinching critique of capitalism’ 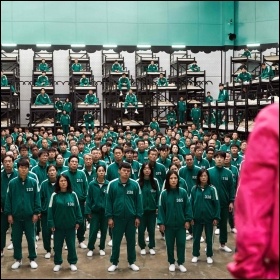 Squid Game is available to stream on Netflix   (Click to enlarge: opens in new window)

The South Korean-produced Squid Game now has over 111 million views around the world, in record time for a series released on Netflix. In the wake of Parasite (2019), it owes its soaring popularity to its articulation of anxieties around crises of exploitation, class, and inequality.

The 456 debt-laden contestants in the games are herded by ‘staff’ in ominous black masks and red overalls through a jarringly pastel-coloured spiralling stairwell. This leads them into multiple oversized children’s game rooms, reducing them to vulnerable subjects. Whilst the games are innocent and basic, the consequence of losing is unceremonious execution. The reward for the last person standing is 46 billion Won (£26 million), collected in a giant illuminated piggy bank hanging above their heads, which gets topped up every time someone is eliminated.

What distinguishes Squid Game from dystopian visions like Battle Royale or Hunger Games is its grounding in a very real social context. The main character, Seong Gi-hun, lives hand to mouth by gambling and hustling for any money he can get. Living with his mother and trying in vain to provide for his young daughter, he is chased around town by violent loan sharks. With the ‘Damocles’ sword’ of debt looming over him, he is easily lured into risking it all in the life or death game – a ‘choice’ between that or destitution.

In South Korea, the level of personal debt has risen faster than anywhere in the world. Household debt alone is greater than the country’s entire GDP. The South Korean working class also has a strong history of struggle. In 2009, the SaangYong Motor Company strike lasted 77 days when the company fired almost half its workforce.

It was ended with ruthless state oppression, the events of which are referred to in Squid Game. During an outbreak of violence between contestants, Seong Gi-hun has a flashback to this time, recounting how he worked there for ten years before being struck off. Around 1,000 workers occupied the factory before police smashed their way in and brutally beat them.

Director Hwang Dong-hyuk directly lays out his intention to create an allegory of modern capitalist society, depicting the extreme competition. The class divide is highlighted by the ‘VIPs’ who, bored with their own hoards of wealth, view the deadly games as mere entertainment. Even the staff who oversee the game are exploited in the system – expendable, and subject to heavy surveillance – from who we see glimpses of humanity despite their oppressive role.

Are people fundamentally selfish or compassionate – or do people’s conditions determine their behaviour? While disgraced businessman Sang-woo becomes corrupted, doing whatever it takes to win, Seong Gi-hun retains his empathy for others amidst the brutality. As the director himself states: “Even when it feels like there’s only despair, fear and sorrow left for those participating in the game, there’s always those who don’t give up their humanity. I want to convey hope.”

Squid Game is a gripping drama, packed with nuanced symbolism, and brilliant acting, sets and cinematography, as well as a dark sense of humour. This, in part, explains its enormous success. But it’s the unflinching critique of capitalism that makes it so resonant to international audiences today, and therefore says so much about the times we live in.