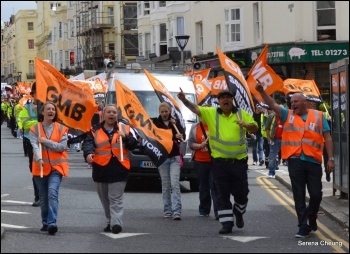 Brighton bin strikers have voted to accept a deal that "ticks all the boxes, and more" according to GMB branch secretary Mark Turner. Yet the union has accused the Green minority-led council of union busting by hiring private contractors to clear the city centre on Saturday, although the council cited health and safety concerns as the reason. Either way, the mood is not amicable.

The head of the Green council has refused to meet with the negotiating team up to this point, and strikers have been labelled "terrorists" by a local Tory councillor.

The Green-led council is expected to cut over £10 million from the budget this year in continued submission to Tory austerity. This latest attack on the terms and conditions of refuse workers was clearly the council looking for ways of cost saving.

Two weeks of industrial action has resulted in the council conceding and offering a pay rise to a thousand council workers, as well as ditching cost-saving plans to change driver routes. This shows what can be won through union action. The workers have voted to suspend action with immediate effect for the deal to pass in its entirety through the council's policy and resource committee.

Council funding from central government has been strangled during ten years of austerity. Without a fightback to demand the resources needed for the city, the council will find itself increasingly in a battle with workers fighting to defend their jobs and services.

The Greens and Labour have shown they are not willing to stand up for the working class. Brighton Labour councillors voted through the Green budget cuts this year. Brighton needs a budget that meets the city's needs, decided by the community and trade unions.

We need councillors prepared to vote against cuts, and campaign with local people to demand the money from central government. That's why we are building for a people's budget meeting, and preparing to stand in May's local elections as part of the Trade Unionist and Socialist Coalition.