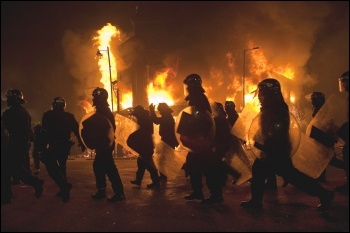 Following the murder of Mark Duggan by the police, riots rocked London, and many other cities, a decade ago. This documentary follows the progression of the riots. It contains interviews and clips from activists, police, government officials and convicted rioters.

Stafford Scott, an activist from the Broadwater Farm estate that Mark grew up on, was the stand-out person interviewed. He says there is no "riot or disturbance that happens in a vacuum", and for it to happen, "people have to feel they've got no stake in society... that they've got nothing to lose".

After Mark Duggan's killing, police drove around the estate laughing, and indicating '1-1' with their fingers to claim the killing as an equaliser for the death of police officer Keith Blakelock in 1985. The police did not contact the family for two days after Mark's killing.

When Mark Duggan's family peacefully marched to the police station, the police physically closed the door and shutters of the police station to the family members that had gone in to ask for the truth. It's no surprise that the BBC chose to mark the ten-year anniversary by focusing on the riots, rather than looking into the police killing that triggered the events.

The documentary includes the capitalist media response, and the political elite's belief that the riots had nothing to do with poverty. At the time, this peaked with a racist rant from David Starkey on Newsnight. He said that Enoch Powell's prophecy in the Rivers of Blood speech was "absolutely right", except instead "whites had become black".

The state revenge on rioters was cruel. It led to teenagers' lives being destroyed over a few moments of madness. Some faced sentences longer than murderers.

One person recounts how he was targeted as a 'ring leader' and was given the harshest sentence. Not because of what he had done during the riots, but because of previous convictions.

The riots devastated working-class communities. But communities organised to make sure that local shops were protected. Tariq Jahan and his sons were called to defend local shops that the police had abandoned. But his son was tragically killed in a hit-and-run.

The documentary ends on the note that riots of that scale haven't occurred since in the UK, but that is only through luck. The Conservatives have worsened the conditions that led to the riots. Austerity has continued, funding for youth services is being cut, their response to the Covid pandemic has left another generation of youth with no hope for the future, and, of course, the police continue to be unaccountable for their crimes.

To ensure there is no return of the riots, the vast inequality in our society needs to be ended with socialist policies. In response to police crimes, we need independent workers' and community public inquiries, and we need democratic working-class control of the police as proposed in the Socialist Party's Black Workers' Charter.