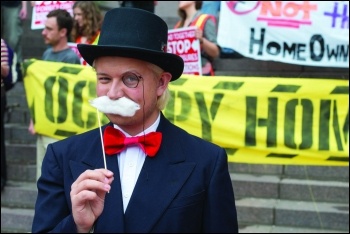 Tory chancellor Rishi Sunak slashed a tax on banks' profits by 60% in his autumn budget statement, shortly after removing the £20-a-week Universal Credit top up and announcing that National Insurance contributions will rise by 1.25 points.

This clearly shows the rank hypocrisy of the government's so-called 'levelling up' agenda. On the one hand, Johnson says he wants wages to rise, on the other he imposes higher taxes for workers and a brutal reduction of Universal Credit. At the same time, Sunak gifts a multi-billion pound early Christmas present to bankers!

The bank surcharge was introduced on profits over £25 million in 2015. It was an attempt to quell mounting political pressure against a broken capitalist system and the excessive profits of the few amid growing poverty for the many.

The effects of the same pressure were shown internationally, when in June the G7 nations agreed a global minimum corporation tax rate at their summit. Since then, the Pandora Papers have revealed those same capitalist states, including Britain, ignore astronomical levels of tax avoidance and money laundering.

Rishi Sunak defends his bank surcharge cut from 8% to 3% as of April 2023, by claiming it is needed for the British finance industry to be able to continue to compete on a world stage. The Tory government's City minister also defends this latest step by explaining: "To be competitive, we have to have competitive tax rates." It is estimated that this tax reduction will result in a loss of £1.5 billion for the Treasury. A further indication of how wealth is trickling up from the poor to the rich.

It's a race to the bottom for workers and a race to the top for bankers. In order for us to remain competitive, workers are told we have to accept lower wages. But the same logic is turned on its head for international bankers! The logic of capitalism is based on the private ownership of vast amounts of wealth by a tiny few. We need a system based on the democratic public ownership of the world's resources - that is the logic of socialism.