Why I joined the Socialist Party - and why you should too 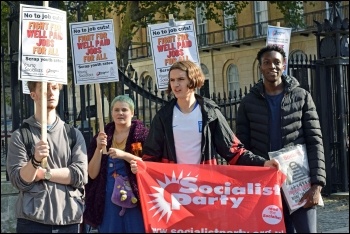 To explain why I joined the Socialist Party, I need to go back to 2008 and the global financial crisis. I worked for a financial start-up that was directly funded by Wall Street investment firm Merrill Lynch.

As far as I was aware, business was going from strength to strength. What I didn't know was that Merrill Lynch would soon be instrumental in the sub-prime mortgage crisis - a major factor in the recession to follow.

The funding for the business was pulled, and we had to cease trading. I was made redundant shortly after. I vowed never to work in the financial sector again after being exposed to the predatory and exploitative practices that plagued the industry.

I decided to retrain as an electrician. After becoming fully qualified, I was excited to embark on my new career.

Unfortunately, the construction industry was also badly affected by the crisis. My efforts to find work as a spark were futile, despite offering to work unpaid just to get experience under my belt.

I spent long periods unemployed or in various temporary jobs on far less pay than I had been used to. All the savings I'd managed to set aside were used on paying the mortgage, bills and two young kids over the following years.

My physical and mental health suffered greatly during this period, but not as bad as some of my contemporaries. The suicide rate for men of my age during this time skyrocketed. Families fell apart, and people lost their homes.

I was always proudly left-wing and a traditional Labour voter. But by now I'd given up on the Labour Party due to Blairism and the invasions of Afghanistan and Iraq.

I bounced between the Greens and Plaid Cymru for a while, but I was essentially politically homeless, and in desperate need of guidance.

Had I found the Socialist Party at this point, it would have made for a much happier ending, but unfortunately that wasn't the case. I was in an extremely vulnerable situation due to financial stresses and poor mental health.

I came dangerously close to sinking a lot of money into 'multi-level marketing' schemes, trying to recoup lost savings. I also fell into pseudo-scientific wellness practices in an attempt to ease the pain of everyday life.

Social media platforms were beginning to dominate. It was becoming very easy to fall down conspiratorial rabbit holes, so this was also a danger. I can sympathise with the many alienated and disillusioned people that fall victim to these scams in the absence of a convincing alternative to the status quo. So many people could be won over to socialism given the opportunity.

I am part of a generation that saw the fortunes of our parents better than our grandparents, who also had it better than their parents. Naturally we expected to have it even better, entitled to greater wealth and comfort than all before us, and expect to provide an even brighter future for our children.

Despite being left-wing, I still had vague illusions in the 'trickle down' economics that we were taught to trust in. So I was confused, and blamed myself for not being able to be the provider of a lifestyle my family deserved, rather than the systemic failures of capitalism.

In 2016, things started to change. Jeremy Corbyn became leader of the Labour Party, and Bernie Sanders came close to winning the nomination for the Democratic Party in the US.

The word 'socialism' was becoming less taboo, and the ideas were gaining popularity. I voted for Labour for the first time in ten years, and decided to look for socialist groups locally to discuss the ideas and get involved in activism.

I submitted my email address on the Socialist Party website, was contacted the next day, attended my first branch meeting and joined within a few weeks.

In hindsight, I can now identify capitalism as the system that had such a devastating effect on my life and continues to have on billions of people across the world. Over the last four years in the Socialist Party, I have spoken at meetings on subjects I knew nothing about when I joined, at my own and other branches.

I've been voted onto the local branch committee. I've attended the annual Socialism event, Socialist Party national council meeting in 2021, congress in 2020 and was present at the historic refoundation of the Committee for a Workers' International in 2019.

Joining the Socialist Party has changed my life, and Marxism has taught me so many important lessons. One of the most important is the need for a mass party of a united working class.

As we emerge from the pandemic, it is likely that we will have more austerity forced on us. And there is a real possibility of another economic crisis.

I can't avoid this, but I'm now part of an organisation that will lead the fightback against this. And I'm better equipped to help others make sense of what they're experiencing, and how we can solve the problems.

I would urge anyone who's yet to make that step to join the Socialist Party, get involved and join the struggle for a better, fairer society.

Join the fightback, Join the socialists