On 30 October, thousands of Sudanese people living in Britain, and their supporters, took to the streets to protest against the military coup. Read more about what's happening in Sudan on page 15. 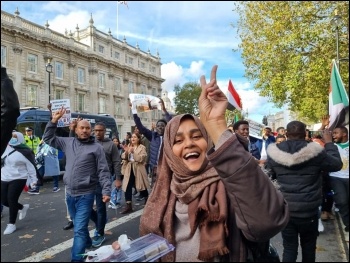 The revolutionary energy of Khartoum echoed through the streets of London. Many demonstrators were recent refugees from Sudan.

Revolutionary sentiment was fever-pitch, with Arabic chants of "revolution" and "democracy". Further protests are being planned.

Many agreed with the Socialist Party when we said not to trust the capitalist politicians, the need for a revolutionary government of workers and the poor, and for a socialist Sudan.

Demonstrators readily took our leaflet, and read and studied it closely. One demonstrator carried his copy of the Socialist open at the Sudan article high above his head, using it as a poster.

"Those killed in the revolution are still living amongst us". Over 100 Sudanese people protested, mostly refugees and students. Many had been involved in the 2019 uprising that overthrew the hated al-Bashir dictatorship.

With all internet and social media closed down since the coup, they were worried about their family and friends in Sudan, but also hopeful that the masses would once again overturn military rule. And one of the protesters agreed to speak at our Socialist Students meeting on 2 November.

"We don't want the military in government anymore." Over 100 people rallied, predominantly from Leeds' Sudanese community, although a banner brought solidarity from Leeds Trades Union Council (TUC). We ran out of copies of the Socialist Party's leaflet.

I spoke on behalf of the Socialist Party, bringing solidarity with the resistance against the coup, and raising the need for the struggle against the military leaders to be based on grassroots organisations of workers and the poor, like the Neighbourhood Resistance Committees, which should be rebuilt.