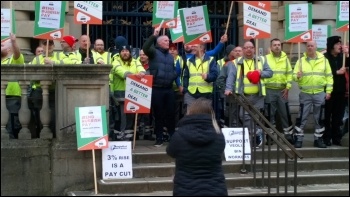 "End rubbish pay!" was the chant outside Lumley Street depot as around 150 Sheffield bin workers, members of the GMB union, began strike action on 8 November for an above-inflation pay rise.

Employed by multinational Veolia on the council's outsourced waste management contract, the workers have rejected two below-inflation offers, the last one being 3% a year on a two-year deal. At a gate mass meeting, they voted unanimously to serve notice of all-out strike action from 22 November if their demand for a one-year 6% rise is not met. But it's not just about pay, it's about erosion of terms and conditions, and especially about bullying management, 'Nasty Nick' mentioned by name!

The four-hour strike kept all the bin wagons behind locked gates, and the strikers marched to the town hall, drawing noticeable support from honking vehicles and shoppers clapping. There, GMB regional officer Pete Davies said about the Labour cabinet: "Its time they got off their arses and show that it's the dog that wags the tail, not the other way round."

The Socialist Party goes further - the Veolia contract should be brought back in-house now.