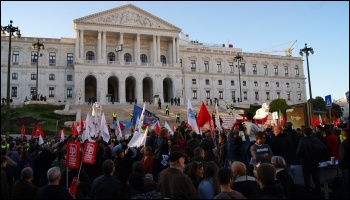 Anti-austerity protest outside the Portuguese Parliament, photo   (Click to enlarge)

Portugal is facing a snap general election, two years early, after the ruling minority Socialist Party (PSP - an establishment party) government headed by António Costa failed to get its budget passed through parliament.

Right-wing President Marcelo Rebelo de Sousa dissolved parliament on 3 November. With new elections on 30 January, and damaged after six years of propping up Costa, the left must urgently move onto a war footing.

A new direction must be declared immediately, breaking with the mistaken policies of the past, and offering a bold socialist programme and the abolition of the capitalist system.

Despite twice failing to gain a majority in parliament, this is the first time in six years that Costa's budget has been voted down.

Unlike previous years, the left parties - Left Bloc (BE) and the Portuguese Communist Party (PCP) - were pushed by growing working-class anger, and electoral losses, into refusing to support or abstain on the budget vote.

Separate strikes on the railways, in hospitals, schools, the civil service and more, are rippling through Portugal, meaning that BE and PCP representatives in parliament could not get away with repeating their previous votes for Costa's budgets.

They were boxed in by their support - in reality never more than verbal in the past - for demands like the lifting of anti-trade union laws left on the books by Costa, free childcare, and for using European Union (EU) bailout money to fund improvements to public services and increases to pay and pensions.

Outside Portugal, the PS government is widely represented as a 'left government' which ended austerity, and is contrasted with the neoliberal leaders of, for example, France and Germany.

But in reality only a tiny handful of the previous attacks by the right-wing Coelho government have been reversed, and new ones added. The living standards of working-class people in Portugal have continued to decline while Costa has ruled.

More than 2.6 million of the approximately 10 million inhabitants live in poverty. Wages are at less than half the European average, and have fallen every year Costa has been in power.

What relief has been provided to workers - some reversals of cuts to pensions for example - was bought by starving public services of investment as Costa cut spending in obedience to EU demands. This meant, among other things, that Portugal faced the Covid pandemic with the lowest ratio of intensive care beds per person in Europe.

Through the pandemic, the Portuguese government has prioritised profits over the safety, incomes and broader interests of Portuguese workers (See 'Portugal: Right-wing incumbent wins presidential elections as far-right makes gains' on socialistworld.net).

Before the rising tide of militancy, paltry concessions offered by the PSP government would have been enough to buy the support of the left in parliament, but in the raised political temperature, Costa's offer to increase the minimum wage from €665 to €705 before the election (and more afterwards) cut no ice.

Left leaders are also being pushed by internal crises which have broken out in both parties as a result of losses in elections.

In the 2019 general election, the PCP had its worst result since the fall of dictatorship in 1974, losing almost one-third of its MPs, although their more solidly working-class base has held together better than that of the BE (see 'Portuguese elections - new class battles loom' on socialistworld.net).

And in council elections held earlier this year, the Left Bloc was reduced to just five councillors in the whole country, winning a mere 2.8% of the vote.

The PSP lost control of Lisbon council in the same elections. However, opinion polls currently predict PSP will emerge as the biggest party, although still in a minority.

But it would be foolish to rule out in this confused situation, and with no credible lead being offered on the left, that right-wing forces can advance.

The opposition capitalist Social Democratic Party (PSD) is distracted by a leadership election, which will finish just weeks before the snap election. But it could make gains, particularly if it imitates Isabel Diaz Ayuso over the border in Spain.

Ayuso won the elections to Madrid's parliament this year on the basis of right-wing populism which - thanks to Podemos joining the government - wasn't exposed by a credible anti-establishment left challenge (see socialistworld.net 'Right-wing Partido Popular wins Madrid elections - a warning to the working class).

Portugal's left parties have little time to learn the lessons of this defeat. They must urgently re-examine their strategy and approach before taking a new road.

As the CWI previously explained (see 'Portugal: Right-wing government brought down' on socialistworld.net) it was not wrong, in the situation which confronted them after the 2015 election, for the Left Bloc and the PCP to use their votes in parliament to allow the PSP to block the return of the hated right wing.

PSD leader Coelho was confronted by five general strikes before his eventual defeat in 2015, and there was a burning desire to be rid of him. With the PSP in a minority, if the left had failed to use its votes to permit Costa to take power, the PSP would have been spared the test of government. In opposition, and blaming the left for it, illusions in the PSP would have been strengthened, not weakened.

But, as we explained at the time, it was a fatal error to sign up to a 'gerinconça' pact - the 'bizarre contraption' as the press called it - which guaranteed Costa stability without winning commitments to stopping attacks on the living standards of the working class.

As soon as Costa was in position, the left should have immediately gone on the offensive - with street protests and trade union action - to demand bold socialist policies which could begin to solve the problems facing working-class people.

This would have started a process of clearing the immense political confusion which exists, and demonstrated whose side the different political forces in Portugal are on.

Either concessions would have been forced from the PSP, or workers' illusions in it would have been dispelled and, at a time favourable to the left, new elections forced.

Instead, while Costa used anti-trade-union laws to break the strikes of nurses, tanker drivers and airline workers, the left continued to prop him up.

On paper, both parties were in favour of reversing austerity, but none of these policies were laid before parliament as a challenge to the PSP. Effectively, in the minds of the masses the left parties stood not for socialism but for the policies of the capitalist government.

That's why it's necessary that a declaration be made now of the intention of taking a 'new course' - the heart of which should be a bold promise of socialist transformation to finally halt Portugal's economic descent.

The Left Bloc and the Communist Party should discuss collaborating in the election campaign ahead, and form a united front to fight it and to prepare for the fight that will be necessary whichever of Portugal's capitalist parties forms the next government.

Workers' anger is boiling over in the workplace and onto the streets. A call should also be made for the rash of strikes which have broken out to be gathered together into generalised action involving the CGTP (the largest trade union federation) and the new unions; starting with a one-day general strike, so that a demonstration of workers' power forms the background to the elections.

With Covid-19 cases rising again, and healthcare in the spotlight, a call for private healthcare to be nationalised should be made, along with the biggest organisations which dominate the economy - run under workers' control and management and coordinated according to a plan drawn up democratically.

This would have to include the banks and the financial system so as to defend Portugal against threats that have already been made by the EU to repeat the economic terrorism they unleashed against the left Syriza government in Greece (see 'Greece the rise and fall of Syriza' on socialistworld.net).

The left has nothing to lose: as things stand, polls predict they will sink even further. It is not clear whether the Left Bloc will even survive.

Currently, far-right party Chega, whose candidate came very close to coming second in the presidential elections this year, is able to pose as anti-austerity without being challenged credibly by the left.

However, it is a period of sharp twists and turns in the situation, where a long-overdue radical correction could make a profound impact on the result.

Capitalism's failure to find a way forward is stark in Portugal. There is no 'Keynesianism' (ie a programme of publicly financed economic stimulus) on the agenda.

Costa has announced that he plans to continue the hopeless and destructive attempts to cut Portugal's deficit and clear its mountain of debt - now a colossal 133% of GDP (total output) according to the latest figures.

He is bashing the head of Portugal's working class against the brick wall of the rigged capitalist system. Even optimistic projections predict that GDP will be below pre-pandemic levels for decades. Class struggle, in that context, is inevitable, and building a political vehicle to direct workers' anger is essential.