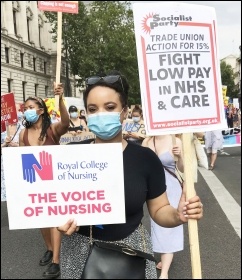 A young woman recently collapsed near our Socialist Party campaign stall in Cardiff with a suspected stroke. We helped her father to contact emergency services but after a lengthy conversation we were told that an ambulance would take three to five hours to arrive.

The NHS Confederation, a body which brings together senior managers in the health service, has said the NHS is "at tipping point". But these bureaucrats are out of touch: the collapse has already begun.

A few weeks ago I rang 999 about severe abdominal pain and waited five hours for them to call back, only to be told the ambulance would take another two hours to arrive. When I eventually got to A&E I waited another 30 hours in a chair before I was diagnosed with appendicitis, which by then had perforated through to neighbouring organs. The nurses in A&E were stretched beyond their limit, too busy to attend to everyone's pain management and other needs.

I had emergency surgery at 2am and spent a week on a ward for recovery next to a patient, severely brain damaged in a car crash, who shouted with pain every time he exhaled. When I spoke to the nurses they said there was nowhere else he could go: all beds were occupied. His relatives had to say their goodbyes to him on a crowded ward surrounded by strangers.

My experience will be familiar to everyone who has had to attend hospital. 160,000 people are being harmed every year because emergency treatment they need is being delayed according to ambulance bosses. 12,000 are severely harmed, and some are dying in ambulances outside hospitals or while waiting for them to arrive.

Even the likes of Jeremy Hunt, former Tory health secretary, have admitted that the crisis is not just the result of pressure caused by the pandemic. It's due to damage done by Tory governments, including Hunt's, demanding cuts, and devolved governments and NHS bodies obediently carrying them out, slashing staff and services. There are half as many beds in English hospitals as there were 30 years ago and even bigger reductions in Wales.

What is needed is not simply temporary funding for the NHS, but a permanent return of the lost beds and workers.

Conditions are intolerable for NHS workers. No wonder there are 90,000 unfilled vacancies in the NHS in England, and similar figures in other parts of the UK. Three quarters are considering leaving the service. There must be a crash recruitment programme announced immediately, but that won't work unless workers get the 15% pay rise they're demanding to recover what's been lost over the decade.

We need a massive increase in funding to meet the demand. The assets of private healthcare firms, which trousered huge amounts of public money during the pandemic, should be requisitioned and a real, efficient, democratically planned health service refounded, with frontline workers who know the service best controlling and managing it. We've got to build a new workers' party in order to fight for that programme and end the crisis in our NHS.

Come to the Socialism 2021 workshop 'Can the NHS survive?'

Go to Socialism2021.net for details - and for info about the many other sessions during the weekend event.