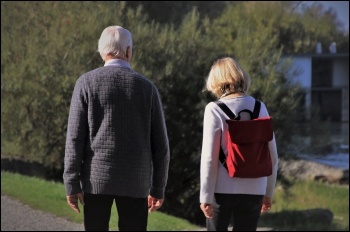 The Office for National Statistics announced that inflation increased to a ten-year high of 4.2% only 36 hours after MPs voted to ditch the triple lock on pensions. Millions of older people will now be forced to choose between eating or heating. The Tories have betrayed over 2.1 million pensioners living in poverty.

With bills rising and in the teeth of a pandemic, the Tories have broken a manifesto promise and this year scrapped the triple lock, which had ensured that the state pension rose annually by either inflation, wage growth, or 2.5% - whichever was highest. The UK state pension can be as low as £137.50 a week, one of the lowest in the developed world.

Figures show that one in five pensioners in the UK are living in poverty, with 1.3 million undernourished and 25,000 dying each year due to the cold weather. Pensioners aged 85 and over have the highest rate of poverty at 22%; this has risen by 6% since 2012.

Working people produce the wealth in society and all we want is a decent life from cradle to grave. The bosses are only interested in their profits; they don't care about our pensions which, after all, are our deferred wages. The trade union movement must fight for an immediate 50% increase in the state retirement pension as a step towards a living pension.