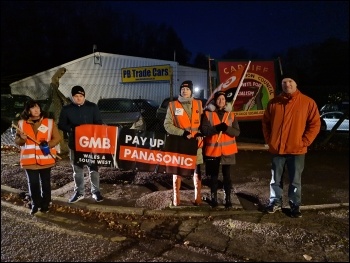 About 100 workers at Panasonic's factory in Cardiff took their second day of strike action on 22 November for a decent pay rise. Panasonic has offered yet another pay freeze. The workers, members of the GMB union, are demanding 5%, itself a 'stand-still' pay rise, merely keeping up with cost of inflation after years of pay freezes and below-inflation pay rises.

Panasonic, which has an annual turnover of £50 billion a year, claims it cannot afford a real-terms pay increase this year. It offered the Cardiff workforce 1%, but when that was rejected it withdrew even that paltry rise.

Production workers are paid the minimum wage of just £9.18 an hour, despite having important skills. Their pay would rise by 3.5% to £9.50 anyway in April because of the rise in the minimum wage.

The company managed to keep production of microwaves going through the first strike day, but much of the work had to be binned because the work, using unskilled labour, was no good. The company would have lost thousands.

Skilled warehouse workers are currently paid £10.50 an hour, while the going rate for the Panasonic workers' level of skills is more like £13 an hour. The Socialist Party calls for a £15 minimum wage for all.

In the past, Panasonic was seen as a good place to work, but for years workers' pay has fallen further and further behind the cost of living, with pay freezes and below-inflation pay rises every year. The company has been chasing low wages, closing down other plants in Cardiff and Newport 15 years ago, and transferring production to new factories in eastern Europe and Vietnam.

After years of pay cuts and bullying management, Cardiff workers have had enough. 40 workers have turned out to support the picket line. An overtime ban continues. The next two strike days are on 29 November and 6 December, and the strikers are looking to spread the strike through the site, with members looking to move to two-day strikes.