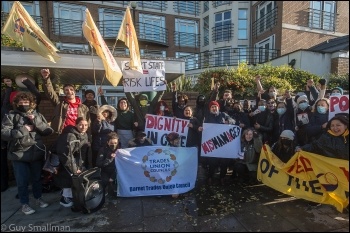 Sage care home workers in Golders Green, north London have won an 11% pay rise to at least £11.05 an hour following strike action. The dispute started at the beginning of the pandemic in March 2020 when workers were forced to make their own PPE, and it escalated from there.

The members of the United Voices of the World (UVW) union, who work in care, domestic and maintenance, will now earn the 'London Living Wage'. UVW described the move as a "huge win for pandemic heroes".

Bile, a senior care worker at Sage, said: "We went above and beyond to stand for what we deserve. We know that none of us acting alone can achieve success and we understand that there is still a way to go."

UVW anticipates that this strike will be a historic turning point for carers. The courage of these workers could certainly act as a lesson and inspiration.

But for this strike to lead to more widespread industrial action, as the Socialist said in February: "It is vital that not just UVW, but other major unions - Unite, GMB and Unison - develop a plan to popularise these demands and link workers up throughout the sector. This could inspire some of the lowest-paid workers to join a union, and fight for a radical set of demands."