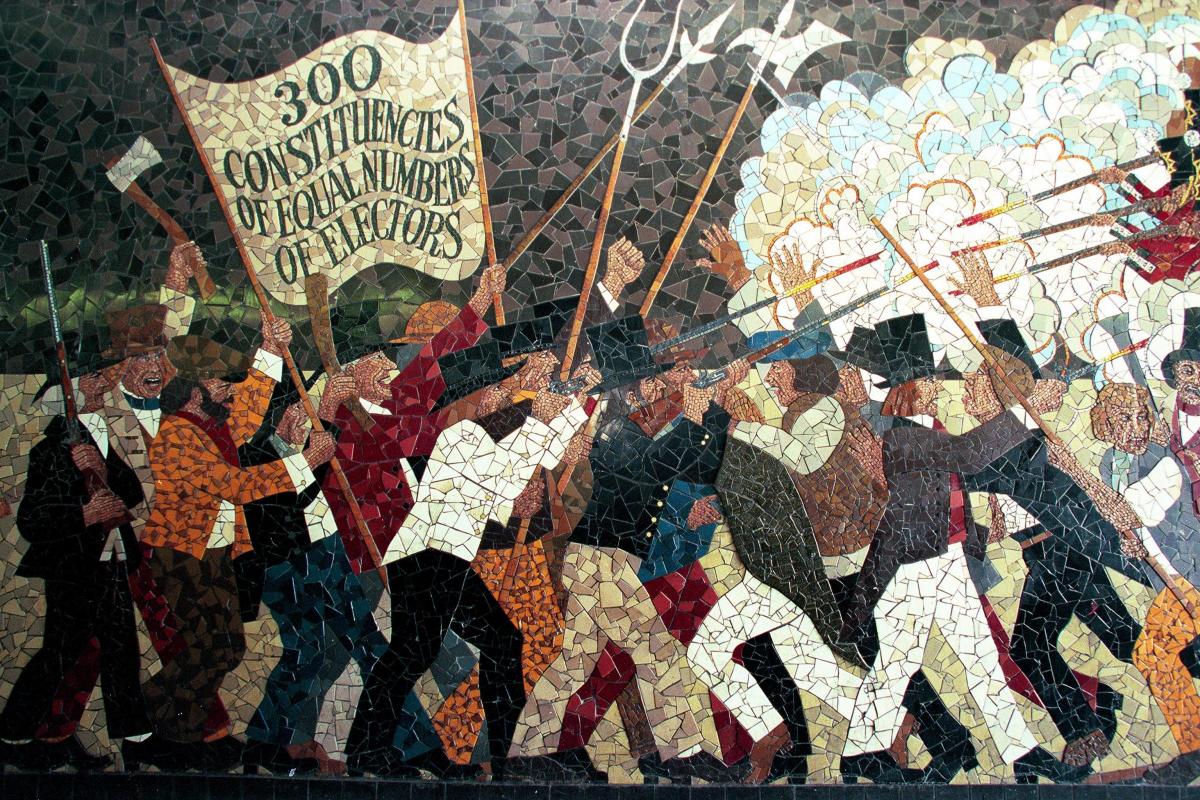 In the first of an occasional series on the history of working-class struggle in Britain, Scott Jones looks at the world’s first working-class mass movement, the Chartists. 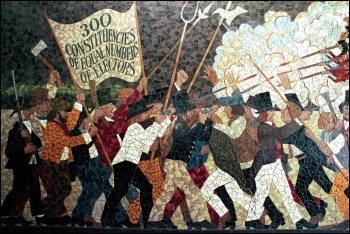 Part of the Chartist mural in Newport depicting

On a November night in 1839, 10,000 workers marched through heavy rainfall and darkness from the South Wales Valleys into Newport, flooding down Stow Hill to demand the release of their comrades they believed were imprisoned in the Westgate Hotel. Within an hour, dozens were dead and wounded after soldiers opened fire. The workers, the imprisoned, the dead and the wounded were Chartists.

Chartism was the first mass movement of the working class in the world. It took its name from the ‘People’s Charter’, a list of demands drawn up in 1838 by the London Working Men’s Association because property qualifications prevented workers from standing for parliament or even from having a vote. It was only the preserve of the wealthy.

The demands were: suffrage for all men aged 21 and over; equal-sized electoral districts; voting by secret ballot; an end to the need for a property qualification for parliament; pay for members of parliament; and the annual election of parliament.

All but one of them has now been met. The concrete demands for working-class political representation, weren’t simply demanded for democracy’s sake, but formed the basis of a movement designed to give a voice and platform to the working class to fight to change society for the better.

The industrial revolution had been characterised by class struggle, with clashes at Peterloo, Pentrich, Merthyr in 1831 – when the red flag was first flown in struggle by workers – and elsewhere.

Friedrich Engels, and Karl Marx were both in contact with the Chartists. Engels wrote in his book Socialism, Utopian and Scientific that Chartism was “the compact form of the proletariat’s opposition to the bourgeoisie”. Chartism represented the working class’s fight with capitalism and the establishment.

He says that the struggle reached its height between 1838 and 1842, with the summit of that struggle being events in South Wales especially the Chartist uprising in Newport in 1839.

This reflected the rapid industrialisation of places like South Wales, the north of England, the Midlands, Scotland and so on at this time, where areas were transformed into industrial powerhouses employing thousands of workers. These new conditions determined the consciousness of these workers. And there was mass participation of workers in Chartism.

In the lead up to the Newport uprising, branches sprung up in 42 towns and villages in South Wales, with an estimated 25,000 workers involved, in the space of a year following the drawing up of the Charter.

Membership cards were issued, and some meetings were attended by half the population of some villages. It had its own press in the North of England and elsewhere.

Some of these branches had women’s branches, despite the fact that the Charter only called for votes for men, this shows the movement went beyond the question of suffrage.

Like their husbands, fathers, sons and brothers, life was extremely tough, wages were low, and work was back-breaking in dangerous mines and ironworks, and in the cotton mills of northern England.

As William Price, a Pontypridd Chartist leader, said: “Oppression, injustice and the grinding poverty which burdens our lives must be abolished for all time.”

Workers were forming the first trade unions and the increasingly bitter battles with the employers convinced them they needed to change society through political means.

A nationwide petition was launched to send to Parliament in the hope of winning the demands. It was signed by a million workers and supporters, but it was inevitably rejected.

This rejection created a crisis in the Chartist movement, which had already developed both a ‘moral force’ wing and a ‘physical force’ wing.

The moral force wing was dominated by the middle class and believed that reforms could be won by appealing to the ruling class. The rejection of the petition undermined them and gave an opportunity to the mainly working-class physical force Chartists who were influenced by revolutionary ideas and believed in the use of force to win and go further. They prepared a plan to use the disappointment at the rejection to prepare an insurrectionary movement to seize power in a number of areas starting with South Wales.

They wanted political power to make a material difference to their lives and knew those in power would not give it up easily.

Serious preparations began for a march to Newport which they hoped would trigger other risings elsewhere. Preparations were made in London, Yorkshire, Lancashire, Newcastle, Birmingham and the West Country in England, and Dundee in Scotland.

A workers’ militia was formed and drilled under the bosses’ noses. Plans were made to fraternise with troops sent to Newport. Hundreds of picks were secretly stored in caves in the valleys. Firearms were stolen.

Many of the workers wanted to go beyond winning the original demands, and wanted the insurrection to give them control of the mines and ironworks, as well as expropriating the banks.

One Chartist branch declared: “The ironworks do not belong to the present proprietors but to the workmen and they will very shortly have them.”

While their husbands marched on Newport, two women had the following conversation in Gelligaer: “I want some coal and I don’t know what to do now the colliery has stopped.”

“Oh don’t worry, go and take some coal off the trams on the tram road.”

“What will Mr Powell [the colliery owner] say if he should hear of it?”

“Oh never mind him, the Gelligaer colliery will be my husband’s tomorrow when Newport is taken.”

The authorities later discovered the owner had been marked down to work as a coal cutter if the miners had taken power.

Despite painstaking preparations, on the day itself the element of surprise was lost as the earlier sections waited for hours for the slower detachments to arrive. Soldiers were waiting to gun them down.

Following the defeat, South Wales was placed under martial law and hundreds of Chartists arrested or forced into hiding. 82 were sent to trial and five leaders were sentenced to be hung, drawn, and quartered (the last people to be given that sentence).

The executions were commuted to transportation to Australia because of the outcry and threat of further unrest.

The struggle for the Charter continued through the 1840s and 1850s with a mass movement of further petitions, demonstrations, and general strikes. There was also internationalism as they supported and were in touch with other movements in other countries, like in the 1848 revolutions. 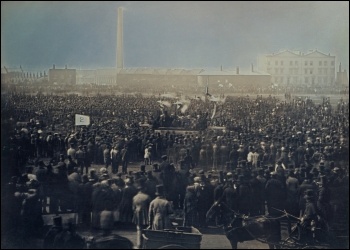 This included a new, mass demonstration announced for 10 April 1848, to be held on Kennington Common, London. After the meeting, a planned procession would carry another petition to Parliament.

In anticipation of the announced march, Parliament revived a statute dating to the time of Charles II that forbade more than ten people from presenting a petition in person.

The authorities knew that the Chartists were planning a peaceful demonstration, but still wanted a large-scale display of force to counter the challenge.

100,000 special constables were recruited to bolster the police force, and the military threatened to intervene if working people made any attempt to cross the Thames.

The planned procession to Parliament to present the petition was cancelled.

The meeting was peaceful and finished without incident, after which the petition with its many signatures was sent to Parliament in three cabs accompanied by a small group of Chartist leaders. Again, this was rejected by parliament.

Eventually the vote was conceded to male workers between 1884 and 1918, due to a period of increased workers’ struggle in the new unionism movement, the founding of the Labour Party and revolution in Russia. But not to all women until 1928.

It took the threat of that revolutionary movement before they were even willing to grant those!

The Chartists rightly fought for pay for MPs so that not only the wealthy could afford to go to Parliament and workers could represent other workers.

Now, the state system pays MPs huge sums to ensure they live lives removed from workers and are not under workers’ control. That is why the Socialist Party demands that MPs must be paid a workers’ wage, continuing in the spirit of the Chartists.

The Labour Party’s transformation into capitalist New Labour – and the retaking of the party by the right after the Corbyn years – means that, once again, the working class needs a mass political party.

An example of Labour’s degeneration was the smashing up by Newport’s Labour council of the beautiful 200,000-piece mosaic on a 35-metre wall cleverly depicting the march of the Newport Chartist uprising of 1839 – to make way for a shopping centre.

The demand for a new workers’ party continues the Chartists’ struggle for democratic rights as a step to a workers’ democracy and socialism. And it was working-class struggle and threat of revolution that won these rights in the first place and is needed today.

The Trade Unionist and Socialist Coalition, the coalition the Socialist Party takes part in, has stood in elections, and will do so again next year, standing in the best traditions of the Chartists.

One of the leaders of the Russian Revolution, Lenin, described the Chartists as the “the first broad, truly mass and politically organised revolutionary movement.” The task now is to take the lessons and inspiration from struggles like those of the Chartists to build a similar movement today: with the benefit of the writings of Marx and Engels, the example and experience of the Russian Revolution, and also our own history of struggle in the Militant and now the Socialist Party, to fight for socialism today.