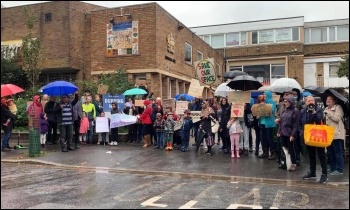 On 16 November, a Newham Council committee unanimously approved the demolition of the iconic Durning Hall community centre in Forest Gate, east London - another shameful act of gentrification by the 100% Labour-controlled council.

We were given just 48 hours' notice to request a speaking slot at the hearing. Nine people attended to oppose the application, given just 15 minutes between us to speak.

I was one of six objectors able to address the hearing, speaking in a personal capacity as chair of a local housing coop. The vast majority of the flats that developers Aston-Mansfield want to build on the site will be unaffordable for local people, and 90% of the community space will be lost. The remaining space will only be available at Aston-Mansfield's discretion, i.e. not for public use.

To justify the loss of community space, Aston-Mansfield was required to demonstrate "realistic proposals for re-provision that continue to serve the needs of the neighbourhood and wider community". But Suz Hu, from Durning Hall Redevelopment Community Action Group, told the hearing that the closest alternative venues listed were "not feasible, being too small, not accessible, already booked out to existing clients, too expensive, or not available to hire at all."

Aston-Mansfield's 'consultation' was a farce. They never made it clear that the new community space would prohibit user groups.

Suz was only the seventh objector to the plan. But after she told others, objections rose to over 200. One councillor admitted this was "the highest number of objections we've seen in any application."

The decision has to be formally ratified by London mayor Sadiq Khan. Although the odds are heavily stacked against us, the campaign to stop the Durning Hall redevelopment will continue.