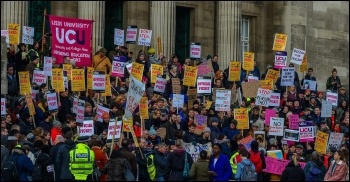 The decision to go on strike is never an easy one. Every University and Colleges Union member that voted 'yes' to industrial action knows full well the impact our strike will have on students' education after what has been a difficult period.

This round of industrial action is about pensions, low pay, casualisation, unmanageable workload, and inequality in pay based on race, gender, and disability.

But it's also much more than that. It's about agitating to displace the business model that renders students consumers and staff expendable cogs in the machine.

We are taking action to fight against a marketised higher education system that does not serve the needs of students and staff alike. At the peak of the pandemic we saw the lack of regard universities across the country had for students, ushering them into halls of residence where they were forced to stay indoors in small living quarters. The reason was simple: to ensure the next year of rental income.

The crisis in many students' mental health and Covid-19 transmission that followed illustrates the complete lack of duty of care. Despite this, the very same university bosses insist on attempting to drive a wedge between staff and students. What they forget is that our struggle is the other side of the same coin.

The idea that students and staff are not on the same page is undermined by the fact that many of us are both staff and students. For PhD students in the humanities, our scholarships are not enough to cover our basic needs.

As a result, we are forced to find low-paid and precarious employment within the department. As a member of staff who also teaches, we are paid by the hour; the time allotted to prepping, teaching, and mentoring students is not sufficient to ensure we meet the expected standards.

I was also part of the first cohort of students who were made to pay £9,000-a-year tuition fees and have seen first hand how students went from learners to customers almost overnight.

Unless the bosses move, this is likely to be the start of many rounds of industrial action. But we are determined to win. What other choice do we have in the fight to build a higher education system that is fit for purpose and run in the interests of both students and staff?