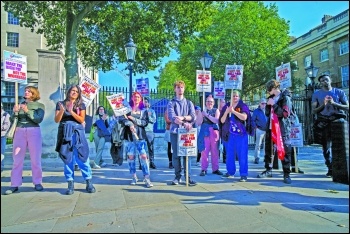 Youth fight for Jobs protested for well-paid jobs for all on 9 October. Photo: Paul Mattsson   (Click to enlarge)

The National Audit Office has released its report into the government's 'Kickstart Scheme'. When it was first announced, the scheme aimed to create hundreds of thousands of high-quality six-month work placements aimed at those aged 16-24 who are on Universal Credit and are deemed to be at risk of long-term unemployment.

When Rishi Sunak announced the plans for the scheme last year, the Socialist Party said it would simply give big business a source of cheap labour and not do enough to tackle the looming youth unemployment crisis. The NAO report appears to support this, stating that there is no clear evidence that the jobs 'created' would not have existed without the scheme.

Workers on the scheme are paid poverty wages - minimum wage for just 25 hours a week. And the bosses don't even pay that, the government foots the bill!

Youth unemployment has now reached 11.7%, one in five 18-year olds are not in employment education or training. Youth Fight for Jobs, a campaign fighting to secure a decent future for young people, launched by the Socialist Party, says no to bogus apprenticeships or training schemes, and yes to a decent job guaranteed for all at the end of training.

We fight for a mass programme of socially useful job creation. And, unlike Frances O'Grady, head of the Trades Union Congress, who politely calls for the government to 'work with unions on the next phase of the scheme', Youth Fight for Jobs demands trade union oversight and democratic workers' control of any public works, job creation programmes and youth training schemes to guarantee decent pay and conditions for all; no trust in the Tories!