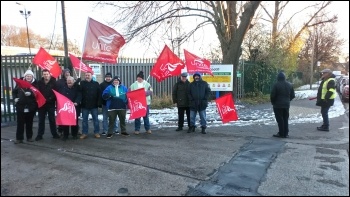 560 Stagecoach bus workers across South Yorkshire, members of Unite, have completed a week of strike action in pursuit of an above-inflation pay rise. The strike at four garages in Barnsley, Rotherham and Sheffield was absolutely solid, with big turnouts at all the picket lines and big support from the public. In fact, more than one driver has said that they've had more support from the public while they've been on strike than they usually get when driving buses!

Apart from school buses, which the union gave dispensation to, Stagecoach has hardly been able to run any services with the handful of non-union drivers still working. The strike has now been suspended for a week to allow the bosses to make an improved offer. But if that doesn't happen, the bus workers will be back on strike for another week from the weekend of 11-12 December. While the union has made a public undertaking not to strike over Christmas, to allow passengers to visit family and friends, they will start an indefinite strike from 1 January if their pay claim is not met.

While the Barnsley and Rotherham depots had a strike ten years ago, as far as anyone can remember, going back at least 27 years, there has never been a strike at the Sheffield depots. One driver at the Ecclesfield garage told me: "I've worked here eleven years and my pay has only gone up by £1.61 an hour!" It's this low pay, combined with rising prices, work overload, poor conditions and bullying management that has led to the strike and a determination and confidence to stick it out till they win.