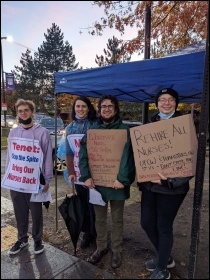 The Massachusetts Nurses Association (MNA) strike at St Vincent Hospital in Worcester, USA, is now the longest in Massachusetts' history.

Nurses first walked out of the hospital in March 2021 in response to unsafe patient limits, inadequate personal protective equipment, and unsafe working conditions.

Hospital owner Tenet Healthcare has continued its dangerous tactics of chronic understaffing, union-busting, and underfunding that led to the strike in the first place.

Tenet Healthcare recently reported a $448 million profit in the third quarter of 2021 from $4 billion in revenue. Tenet has also received $523 million from federal relief funds over the course of the pandemic.

In August, Tenet and the MNA reached a tentative agreement on new safer staffing rules, only to have Tenet turn around and refuse to allow over 100 striking nurses to return to their jobs.

The nurses targeted by Tenet include many senior nurses at the top of the pay scale who have been active in the current strike and were part of the last MNA strike at St. Vincent in 2001.

This is a clear attempt to break the nurses' union at St Vincent by removing the most experienced and militant members of the MNA. As well, prolonging the strike this long has cost Tenet over $3.1 million; mostly spent on hiring police officers from the Worcester Police Department, in order to ensure that scabs and management can continue to keep the hospital running at its reduced levels.

St Vincent is keeping over 100 highly experienced strikers out of the positions some have spent decades working in. After being on strike for over 200 days, the nurses face added pressure from both Tenet and the state government through the cancelling of their unemployment and health insurance.

Tenet's lawyers have declared an 'impasse' in their negotiations with the nurses - legalese meaning that Tenet can now unilaterally implement a contract that does not meet the nurses' demands.

Declaring an impasse is being used as a threat to coerce striking nurses to cross the picket line and abandon the nurses who Tenet refuses to rehire.

Returning to work under these circumstances would mean a defeat for the union and would pave the way for even worse contracts and working conditions in the future, even an attempt to decertify the union and remove all protections that come with union certification.

As Tenet brings its "last, best, and final offer" to the MNA, the striking nurses must in turn deliver a decisive blow to Tenet's bottom line to win the strike.

MNA nurses will need a lot more support from other unions in the area, as well as non-union workers in Worcester and beyond.

Several organisations such as the Independent Socialist Group, Jobs for Justice, and others, have held events on the picket line in solidarity with the nurses.

Rallies, community pickets, and standouts across the city must become more common, larger, and more militant, and be called by the MNA and other unions in addition to community organisations.

Without a strong picket line, there is no chance to defeat Tenet. The MNA and other unions should organise regular mass rallies at the picket line, drawing in their members and workers from all over the state.

Uniting the struggles of workers in central Massachusetts and beyond will beat Tenet, not the hollow promises of local and state Democratic or Republican politicians.

Over the 200-plus days of the strike, dozens of corporate party politicians have visited the St Vincent picket line. They've had their pictures taken with the nurses a few times, then they disappear.

While they claim to be 'working behind the scenes' to 'put pressure on Tenet', there is no evidence that any of this is effective. Strongly worded letters will not put an end to Tenet's attack on nurses' and patients' safety.

At the end of the day, it is these same politicians who vote for laws that weaken union rights, prevent mandatory safe staffing limits and other real improvements to healthcare, and provide tax cuts to these same hospital corporations who profit off of everyday working people.

In order to fight for workers' rights on a mass scale, we need to start organising a political party for working people, independent of the Democratic and Republican parties. A workers' party of unions, community and progressive groups would provide a way for organised and unorganised workers to join together and fight back against big corporations like Tenet.

A unified struggle of working people in Worcester must begin with solidarity between unionised workers at St Vincent. The UFCW 1445 and Teamsters 170 union leaders have refused to honour the picket lines at St Vincent.

If the MNA is defeated at St Vincent, it will only be a matter of time before Tenet goes after the UFCW and Teamsters workers at the hospital. If the Teamsters and UFCW had gone out with the MNA nurses on day one of the strike, all three unions could have won the strike quickly.

It is not too late for these unions to join the MNA on the picket line. Apologists for the Teamsters and UFCW have pointed out that this would be a violation of these unions' existing contracts, and illegal. However, the West Virginia teacher's strike a few years ago was also illegal, but it was also one of the most successful strikes in recent memory.

The working class will always come up against the law when it fights for its rights. We didn't win rights by losing strikes on account of legal technicalities, but by fighting corporate greed with militant workplace action and solidarity.

The Independent Socialist Group has stood with the MNA nurses since the first day of the strike, and even before the strike began. It is in the spirit of solidarity and as part of our continued support for the strike that we offer the following proposals:

Regular standouts, leafleting, and canvassing across the city by MNA members and supporters to raise awareness about the MNA strike.

Members of the Teamsters and UFCW at St Vincent should take job action in support of the nurse's strike. Unions should not be crossing each other's picket lines.

State and nationwide workplace actions in support of the MNA strike at St Vincent.

We also encourage anyone who wants to support the nurses on strike to visit the MNA web page for the strike and donate to the union's strike fund, send messages of support, and visit the strike headquarters and picket line.