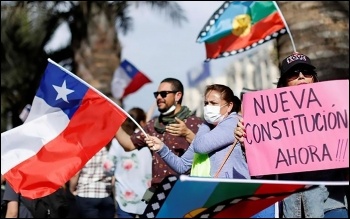 José Antonio Kast, the Republican party’s far-right presidential election candidate, who defends the brutal Pinochet dictatorship (1973-90), is a threat to the freedoms and social reforms of the people of Chile.

In the first round on 21 November, Kast received 28% of the vote, while his nearest challenger, Gabriel Boric of the social-democratic Social Convergence party (part of the Broad Front alliance), got 26%.

Kast does not hide that he wants to end social benefits for families or children who are outside marriage, and would close the Ministry of Women and Gender Equality. He rejects the rights of the LGBTQ+ community.

He also wants to extend the current retirement age for men from 65 to 75 years; and proposes that the first three withdrawals people have made from their pension funds are paid back into it.

He has promised to release the Punta Peuco inmates (the prison which holds those who carried out killings and torture under the Pinochet regime) through presidential amnesty.

This includes Miguel Krasnof who was convicted of so many crimes that he already has sentences for more than 840 years ratified by the Supreme Court!

In the first round, only 45% of the electorate voted. Socialismo Revolucionario did not support any of the candidates. We did not vote for Gabriel Boric in the first round, because he is a regime politician. Together with the right-wing Independent Democratic Union deputies, he threw a lifeline to right-wing billionaire president Sebastian Piñera when he was about to fall in October 2019 – due to the social uprising against economic hardship and social inequality – by supporting the misnamed ‘Pact for Peace and the New Constitution’.

Boric does not support the release of the young people unjustly imprisoned for participating in the revolt. The repressive anti-looting and anti-barricade laws have contributed to keeping thousands of young people in jail. His campaign is characterised by ambiguity and evasion on this issue.

However, Socialismo Revolucionario now calls for a vote for Boric (holding our noses!) in the second round on 19 December in order to defeat Kast and to prevent the coming to power of the extreme right. But we do not give a blank cheque to Boric.

Whatever the character of the next government, we have to rely on social mobilisation as the main tool of struggle. We declare ourselves in opposition to any neoliberal government of the bosses, be it that of the neo-fascist Kast or that of Boric.

A struggle must be prepared against all of them. Part of this is taking the necessary steps to build a real political alternative for workers and young people on a socialist programme.