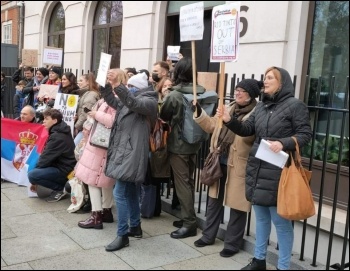 Protesting outside the London HQ of Rio Tinto   (Click to enlarge)

The Serbian diaspora in Britain protested in front of the London headquarters of mining multinational Rio Tinto on 11 December. The protest gave a clear and direct message to Rio Tinto: there is no place to hide.

We were supporting the large protests in Serbia against the lithium mining rights given to this company. This was not the first solidarity protest in London, but it was the largest.

People came from London, but other cities too, such as Brighton and Birmingham. The plan is for the protests to continue and get bigger.

The main demand was 'Rio Tinto, out of Serbia'! Short speeches said that Serbian people in their history have defeated much larger empires than Rio Tinto, and that we will be successful this time too.

However, Rio Tinto is not the only culprit. The priority of the corrupt Serbian government is profits of big business, rather than the interests of ordinary people in Serbia or the environment.

Every mention of the name of Serbian president Aleksandar Vučić was accompanied by loud booing. Rio Tinto has a long history of environmental destruction and human rights abuses.

In Serbia the expropriation law was passed recently. It would have allowed the government to appropriate land or property for "the common good".

It is widely believed that this law was passed in direct connection with the needs of Rio Tinto. The area rich with lithium is also agricultural land owned by small farmers.

This law has now been revoked following the big protests, which reveals cracks in Vučić's stronghold of power.

The anti-Rio Tinto protests are strongly anti-government, because it is recognised that the government is the accomplice of the dirty extractive industry. The Socialist Party and the Committee for a Workers' International (CWI) take this further.

We argue that any capitalist government will bend under pressure from big business. Only by breaking with capitalism altogether can we ensure that the interests of working-class people and peasants are respected, and the environment is looked after. This must be the next step.