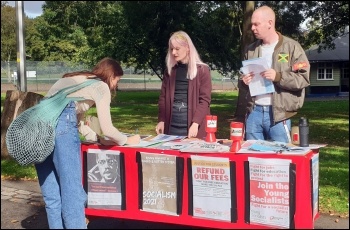 Despite the pandemic, Northampton branch has raised over £1,000 for the Socialist Party fighting fund this year. Beginning the year on Zoom in lockdown, we asked members to contribute £1 or £2 that we would normally spend on a drink or room hire.

We raised money by putting forward our socialist message at the protests against Israeli state attacks on Palestinians, and at the demos against the anti-protest bill. We restarted regular campaign stalls in the spring, where people bought our pamphlets alongside the Socialist paper.

During the summer, we held a car boot sale raising £47.47, helping us smash our quarterly fighting fund target. We sold posters at the university fresher's fair in September. In November, we raffled a handmade jumper at Socialism 2021, raising £55.50. On 16 December, Northampton Socialist Party will discuss more ideas for raising fighting fund.