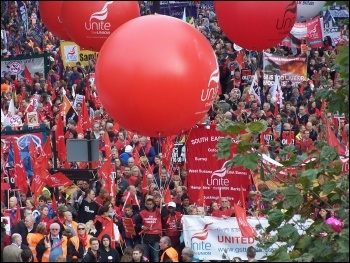 Sharon Graham has completed her first 100 days as Unite general secretary. Sharon's victory in August shocked many on the left across the union movement, but the Socialist Party supported and campaigned for her election. We explained that the most militant Unite members had seen "her left candidature as the most likely to build and organise the union industrially as workers face a brutal offensive from the bosses and their Tory government".

This was in contrast to the other two challengers - right-wing Blairite Gerard Coyne and assistant general secretary Steve Turner, the candidate of the 'United Left'. Coyne's attempt to drag Unite into partnership with the employers suffered a crushing defeat, losing nearly 20,000 votes compared to his 2017 candidacy. We explained that Sharon's fighting programme could undercut Coyne's anti-leadership populism, which Steve Turner was incapable of doing.

While being touted as the 'official' left candidate, it became clear that Turner didn't have the militant industrial strategy that is needed, or believe that the union's political strategy should change in response to Starmer's moving of Labour to the right.

Undoubtedly, Sharon's election has seen Unite move on to the front foot industrially and is seen as playing a central role in the growing workers' fightback. The latest number of disputes the union is engaged in stands at over 50. In interviews given by Sharon in the last few days, it is stated that as a result of strikes, or even the threat of action, Unite members have won pay rises worth a collective £25 million.

Without question, as promised, under her leadership Unite has become far more 'battle-ready' and focused on taking on the employers. A national disputes unit is being established to identify disputes and build and support them, at the same time as combines are being developed - bringing together reps in employers and across sectors.

The union has reacted quickly to the changed situation that has opened up in the last few months as the economy has opened up. The cost of living has shot up with real RPI inflation at 6%, plus Johnson's stealth national insurance tax rise. This squeeze on living standards is forcing more and more workers to fight. This rising workers' pressure has even forced the moderate leaderships of the likes of Usdaw and Community to sanction action. But at the same time, labour shortages have become apparent on top of stretched supply chains, changing the balance of forces in favour of important groups of workers.

With an estimated shortage of 100,000 HGV drivers, there have been big wins in this sector - notably pay rises secured for Liverpool tanker drivers and Wincanton lorry drivers of 17% and 24.4% respectively. Unite is now moving to step up a unionisation drive in this sector, which has been under long-term attack by the employers.

This has also been felt in other sectors as some drivers on buses and bin lorries move to what they see as higher-paid HGV jobs. No wonder there has been a flurry of disputes on the bins and buses. Just in the last few days, Glasgow bus drivers have won a pay rise of up to 21.5%. This is the real meaning of leverage - taking advantage of a more favourable economic situation enabling workers to move onto the offensive and winning victories, building confidence and strengthening the union.

There have also been continued defensive struggles that have been needed to face down the brutal attacks of the bosses, especially 'fire and rehire', often twinned with union victimisation. Scandalously, one of the first to line up with the likes of British Airways in using this vicious tactic in the depths of Covid lockdown was the Starmerite Labour council of Tower Hamlets in east London.

Given the unstable economic outlook, coupled with continued uncertainty over Covid, Unite will have to be at the fore both offensively and defensively in this period. The closure of the GKN plant in Birmingham, despite a vote for action by the workforce, shows that the most militant forms of action will be needed to save jobs and defend communities. Also, while not the leading union in the public sector, Unite can play a big role in building coordinated strike action against the Tory pay freeze. It is preparing for ballots in local government and the NHS.

It is therefore essential that the union's industrial fight is married to a political programme that, for example, raises the need to take factories threatened with closure into public ownership, as well as opposing council cuts. This political strategy is vital as Starmer shows his intent in making Labour safe for the capitalist establishment.

The most important step taken in what Sharon has called "a new workers' politics" was at Unite's policy conference when motions initiated by Socialist Party members were passed. These mean that Unite's official policy is to call on "Labour councils to set legal, balanced no-cuts needs-based budgets". Coupled with Sharon's position to call on Unite's executive council to back only those candidates who support the union's policies, this new policy opens up a discussion in the union about the need to support anti-cuts candidates, in reality, outside of Labour, as the few who would support not passing on Tory cuts would be removed by Starmer.

Even though Unite is still affiliated to Labour, in a context where the Bakers' union, BFAWU, disaffiliated from Labour after its president Ian Hodson was expelled by Starmer, and the Communication Workers Union also cut its funding, Unite can play a central role in the crucial struggle for a new pro-worker, anti-austerity political formation.

But those who support Sharon and her fighting programme have to face up to how this transformation will be consolidated. Those forces who opposed her candidacy and who will have baulked at her opposition to Starmer - especially her support for the no-cuts resolution - still exist in Unite, and particularly in the union machine.

It is essential that a new open and democratic lay member-led left is built that can bring together the best fighters in the union, predominately those who supported Sharon's campaign, along with others who could not be convinced because of fears of splitting the left vote and allowing in Coyne. A new left is needed to act as a check even of a left leadership or, in Sharon's own words, can hold her 'feet to the fire'. But it has to have an open and inclusive approach in which it can comradely discuss its programme and strategy, in order to reach those members who have been put off by the degeneration and bureaucratisation of United Left. There is a real danger that 'Reform Unite', which was formed to organise the election campaign, can be too 'top-down' and repel the best activists.

Unfortunately, the steps to build the left that are needed have not yet happened. The union's rep and branch officers' elections take place in the first quarter of next year, which will be the basis for Unite's constitutional committees and delegates to the next national policy and rules conferences. The year after, the executive council elections will take place.

The Socialist Party calls for an urgent meeting of those who are determined that Sharon's victory is consolidated, to meet together to discuss the basis for such a left to be set up to ensure that Unite remains to the fore both industrially and politically.