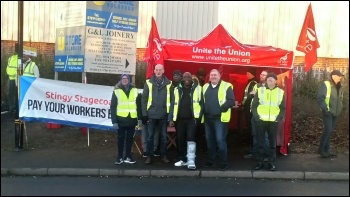 "We've got them by the bollocks" and "we're in charge now", expressed the mood on the Unite picket line at the Stagecoach Holbrook depot, as bus workers in Sheffield joined Barnsley and Rotherham drivers in a second week of strike action over pay. On 10 December, Unite members across Stagecoach South Yorkshire rejected the latest company offer (which wasn't really different to the previous one) with 95% voting no!

Word reached the picket line that the managing director is panicking to end the strike by recooking the figures, but the empowering effect of strike action (the first ever at the two Sheffield depots) and demonstrable public support, has increased the workers' confidence so much that they now want more than they originally put in for! And if they don't get it, they will begin an all-out indefinite strike from 1-2 January. It was good to see a First bus driver joining the picket line to express solidarity saying: "We should be doing the same".