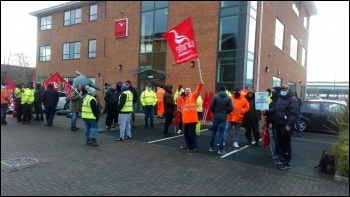 Scunthorpe scaffolders, now in their 11th week of strike action, were given a huge boost on 1 December by the visit of Unite the Union general secretary Sharon Graham to the picket line at British Steel.

Sharon talked to pickets and did a 'question and answer' session on the gate. The scaffs want to reballot to continue the strike, so Sharon promised that the union will up the ante against contractor Actavo and British Steel, who still refuse to pay the national industry agreed 'NAECI' rate for the job.

This will include increasing Unite pressure inside British Steel as well as a leverage campaign targeting Actavo contracts around Britain and Ireland. The huge inflatable Unite 'rat' has appeared on the picket line which is appropriate as the R.A.T.S. rope access firm are reportedly dismantling Actavo scaffolding. In addition, a Unite leaflet distributed to incoming workers highlights an incident where "a worker was threatened with removal from site unless he undertook work for which he had no prior training... As a consequence he incurred musculoskeletal injuries to his shoulder and is off work."

Despite the mainstream and local media blackout, this long-running strike is gaining more support within the labour movement and even internationally. A Unite organisers team travelled to Ireland to publicly expose Scrooge billionaire boss Denis O'Brien, the majority shareholder of Actavo and second richest man in Ireland.

Michael, a Danish scaffolder, brought solidarity to the picket line from the Danish scaffolders union (who first read about the strike in the Socialist), with four Actavo strikers making a reciprocal visit to Denmark.

One of those, Calvin Courtney, writes: "After talking, we discovered scaffolders in the UK and Denmark have much in common, and a Danish scaffolder came to our picket line to show support. We have also flown over to Denmark and travelled the country meeting workers across all trades and learning about their workers' clubs. Meeting them and seeing their passion and solidarity with each other is amazing and very inspiring. Our members have stepped up the pressure on the strike now, and I think meeting the Danish workers has had an impact, inspiring us to do more. I'd like to thank them for donations to help the guys on strike but also for their experience, knowledge and solidarity which will help so much."