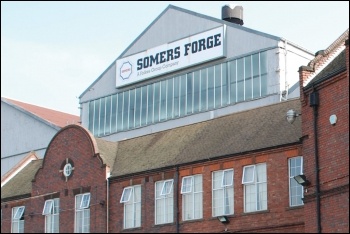 Metal workers at Somers Forge in Halesowen made history just before Christmas after taking strike action for the first time in the factory's 155-year history. Over 30 GMB union members joined the picket line, leading to a shutdown of the metalworking shop.

When the pandemic was raging at the end of 2020, management closed the enhanced sick pay scheme overnight, with workers losing thousands of pounds in contributions paid in over many years.

Then earlier this year, the company withdrew from the existing two-year pay deal, and is now refusing to backdate the new one to April, after stringing out negotiations.

This follows years of pay freezes and attacks on pensions under the ownership of the Folkes family, and is despite the company being consistently profitable pre-pandemic and, by their own admission, having a healthy order book.

Principal shareholder Constantine Folkes himself clocked in at 37th on the Birmingham Post rich list last year (though he's currently resident in Jersey, having previously been under investigation for tax evasion and misappropriation of company funds).

Workers at Somers have now taken two days of strike action, with more planned following the Christmas shutdown to make sure they get a better share of the wealth their work has created throughout the pandemic.