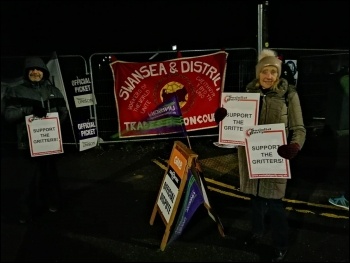 Pickets were out for a second day on 6 January at Carmarthenshire County council depots Nantglas, Crosshands, Cillefwr, Carmarthen and Llandovery, in a dispute by gritting crews. Gritters are taking 12 days of strike action after the council failed to adhere to an agreement on standing down workers after being on call.

Mark Evans, secretary of Carmarthenshire County Unison, explained what the dispute is about:

"All three recognised trade unions GMB, Unison and Unite are taking industrial action as part of an overtime ban on winter gritting due to what the unions believe has been a regular breaking of the winter gritting agreement signed by the Plaid-led council.

"Unison and the other unions believe the council has flouted the agreement that they signed two years ago following industrial action then. We feel we have been compelled to act due to the intransigence of the council who have refused to even acknowledge they have not adhered to the agreement.

"Adhering to the agreement would have cost the council nothing, except perhaps a loss of face. But the council are prepared to pay significant extra sums of money to keep a winter gritting service going when they tell us that the environment department must make further savings - in reality cuts.

"The council claims that some of its values are 'listening to improve', 'working as one team', and 'acting with Integrity'. In not adhering to an agreement they signed they would appear to be flouting the values cited. If they were listening to improve, they would listen to what our members and what the trade unions are saying and act on this. If the council had integrity, they would not have flouted the agreement in the first place.

"We are picketing the depots and calling on the public to support our action that we have been forced to take, and we have further action planned later in the month. The council should get its priorities right. Why plan to spend a lot of extra taxpayer's money to maintain a winter gritting service using inexperienced staff/contractors when skilled and experienced winter gritting council employees are available to carry out the work, if only the council can be trusted to stick with an agreement they have signed."