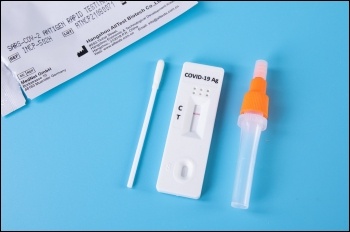 Just before Christmas a number of staff at the Mosley Street Jobcentre in Manchester contracted Coronavirus. In view of the outbreak among staff, and although these affected colleagues were no longer at work, the remaining fifty or so workers had concerns about working in what might be an unsafe office, and contacted their PCS union rep for advice.

The union branch called a members' meeting outside the office which agreed that members would collectively submit Section 44 notices to their employer - a statement that they considered the office unsafe and were not prepared to work there. The meeting also agreed a number of safety demands.

Discussions with management led to an agreement which members accepted as a basis for continuing to work within the office. However, although the immediate concerns in Mosley Street were resolved, the situation brought to the surface dissatisfaction with the PCS DWP Group's union leadership - or lack of it.

Management's disregard for staff safety, work pressures and staffing - with thousands on fixed-term contracts required in the opinion of the PCS DWP Manchester branch - a Group-wide (national) campaign to put pressure on management is needed. There has been no campaign. The union leadership says only that they will support any branch or groups of members that want to fight.

Faced with this 'leadership from behind' approach, the Manchester branch has sent out an open invitation to reps and members in DWP to a meeting on 19 January (on Zoom). On the agenda will be the urgent questions that face DWP workers and what steps need to be taken to make management prioritise the safety of staff and the public, ease the massive work pressures and give job security to all the thousands of temporary staff employed by the DWP.