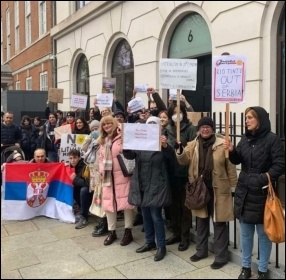 Protesting outside the Rio Tinto HQ   (Click to enlarge)

The proposed mine would be in the middle of the picturesque countryside, fertile agricultural land, dotted with villages and farming communities. The mine would obliterate the environment, pollute land and water, and displace people living there.

However, the farming communities have mobilised, and are strongly opposing the development. Unusually, there are a lot of young people living in the villages.

People want to defend their land. They link it to their great grandparents' struggle against occupation in both world wars.

These sentiments are very strong, not just in the countryside, but towns and cities too. This is why hundreds of thousands of people have joined the protests.

This is not just an environmental issue, but a matter of neocolonialism and imperialism too. Serbia is overrun with foreign companies exploiting its natural resources and cheap labour. The Serbian government is riddled with corruption, and sells resources and workers on the global capitalist market.

The protests are expected to increase after the holiday season. The Serbian government is showing cracks and fear.

It is likely to give promises in the run up to the April elections. Serbian people must take them with a pinch of salt.

The solidarity protests in London will continue. Another is already organised for Saturday 15 January at 12pm. Everybody is welcome to attend - 6 St James' Square, SW1Y 4AD.

The ultimate victory against all exploitation by foreign capital will have to take the socialist path.