Hillsborough and the fight for justice 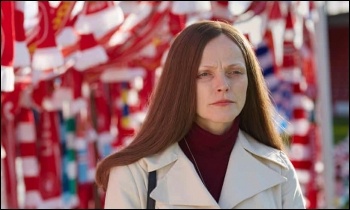 Kevin Sampson's short series on the crusade for justice of one of the 1989 Hillsborough football stadium disaster's victims, 15-year-old Kevin Williams, fought for by his family, and quite agonisingly by his mother Anne Williams, is heartbreakingly portrayed by an outstanding Maxine Peake. It is a hellish journey that explains the campaign for justice.

The survivors, victims' families, and an entire city, have all had to campaign to clear their police, and media-assigned status as "hooligans", "angry", "tanked-up mobs", "arriving late", who "killed their own" and were a "self-pitying city", and so on.

Sampson has done an excellent job of highlighting the events after the football stadium disaster in Sheffield that the rest of the country would not have known - including the boycott of The Sun newspaper (people still find it hard to utter the name).

He has also pointed the spotlight onto where it has been missing by the mainstream media for years, namely Tory prime minister Thatcher's cabinet, South Yorkshire Police (responsible for the tragedy and subsequent cover up), and the often overlooked West Midlands Police - tasked with the job of investigating by Thatcher and the Home Office who had the reputation of being the most corrupt police force in the country at the time.

'Anne' tells the story of how the mechanisms for 'justice' in this country attempted, and to an extent succeeded, in a cover-up of the real cause of the tragedy, then shifted the blame onto the fans.

The result of this was that those responsible were allowed to continue serving in the police service and in the justice system. Ironically, this helped to create a campaign that embodied the strong community spirit of Liverpool and Merseyside.

Several fans tragically took their own lives, and another succumbed to injuries received on that fateful day in the decades that followed. All the while, Anne toiled to get justice served, a Herculean effort that sadly eventually took its toll.

The initial inquiry, Lord Justice Taylor's report into the events of that fateful day in 1989, was more transparent than most that followed but was still not delivering the justice expected in a 'democracy'.

For example, Chief Coroner Dr Stefan Popper implemented a 3.15pm cut-off time on the events, ignoring injured fans alive at that time, but who died later as a result of delays in the arrival of ambulances and other medical support.

'Anne' shows the viewers the fallacies of this cut-off time in the very first episode when special constable Martin said she had heard Kevin Williams speak after 3.15pm, and an off-duty policeman who had tried to give him CPR on the pitch, also acknowledging that Kevin could possibly have been saved.

The Hillsborough Independent Panel reporting in September 2012 concluded that 41 of the 97 deceased could potentially have been saved, but it was police failure of crowd control, and their lies of fans fighting in the ground, which kept ambulances queued up on the road outside, and that fans had forced open an exit gate to gain entry.

Chief Inspector Peter Wright, part of the cover up, was forced to deny this in the days that followed, but the mud had stuck. 'Anne' explains this through an actor playing the part of Liverpool fan Stephen Hart who played an incredible role in trying his utmost to carry the injured to emergency services, with many other fans doing the same while the police looked on.

The TV drama also shone a light on the close friendship Stephen and Anne had in the decades-long battle, revisiting Hillsborough, which has been a symbol of torment for so many Liverpool fans since.

All this preceded the 2016 inquest, the most expensive inquest in British legal history. While the original 1991 inquest decided against delivering justice (declaring the deaths 'accidental'), decades later inquests declared that the 97 victims were unlawfully killed and that fan behaviour played no part in the events they were blamed for.

Sadly, the Football Association, told by the police match commander David Duckenfield that the fans were at fault, went on to tell media outlets this lie, and the myth was spread, even before the last of the injured were being stretched to the medical teams.

Tory Prime Minister Thatcher, who had previously covered up other injustices like the events at Orgreave during the Miners' Strike, and the tainted blood scandal, also in the 1980s, helped in the cover-up of Hillsborough.

Having been fed myths by the police forces and her cabinet members, Bernard Ingham, Thatcher's press secretary regurgitated the myth that drunken fans had turned up late and piled in.

There have been hundreds of innocent families seeking justice, and individuals like Liverpool Socialist Party member Becky Shah, who had to suffer the most painful of tragedies of seeing her mother, Inger Shah, unlawfully killed at Hillsborough on the Leppings Lane terrace, then seeing her mother's death painted publicly in the most negative of lights.

Becky and her brother, who was there on the day, where taken into care after the disaster. Their lives, like so many others, have since been affected so detrimentally.

The barefaced arrogance of the establishment allowed an entire city to be tarnished with stereotypes just to divide public opinion into those that hated Liverpool as a combative city/football team, and therefore used it as a stick to beat the city and its people with, and those who believed the families and survivors, and supported and helped the justice campaign.

The Hillsborough Justice Campaign (HJC) won over many people in the country after producing much evidence, with expert opinion, all of which exposed the top layers of the Thatcher government, the Blair government, and the police forces involved. HJC demonstrated that this cover up and whitewashing of a tragedy was part of the gross negligent attitude towards the working class.

The TV drama doesn't hold the justice system to account as much as is hoped, especially the police. However, it was aired on prime-time television over four evenings, and 'Anne' does capture the agony, the solitude, the fury and the isolation of the families, the survivors and a city, which refused to give up.

It indicates what may be needed in the ongoing fights and crusades to get justice for Orgreave (also involving the South Yorkshire Police), the Grenfell Tower fire, and other miscarriages of justice.

The legacy of Tory and Labour governments since 1989 is the failure to address injustice and allowing the 'powers that be' to influence the outcome of their own investigations.

The crusade that consumed Anne Williams, and all the survivors and families, shows how a mother's love can outstrip corruption. And that when a community is united in holding the corrupt to account, and engages in a determined, organised, fighting campaign, it can find out the truth in the end.

Sampson's drama shows that Liverpool will never forget the efforts and sacrifices that have been made in the constant fight against an establishment which will not deliver the one thing that could have brought closure to so many people - justice.

'Liverpool: A City that Dared to Fight'

'The Rise of Militant'

12 Jan Camden & Haringey Socialist Party: Workers fight back - Are unions turning the screw on the bosses?