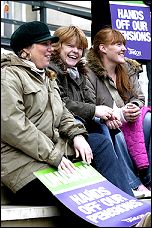 HUNDREDS OF striking local government workers signed the declaration for a new workers' party on the picket lines on 28 March. They were outraged that their union leaders have been donating millions of pounds to a Labour Party that then turns round and attacks their pensions.

"THERE WERE about 300 striking workers at the rally in Southampton," reported Nick Chaffey:

"Socialist Party members went round with the Campaign for a New Workers' Party (CNWP) declaration and got a great response. We had to have a lengthy conversation with everyone who signed, they were so enthusiastic about the campaign.

"After the rally we held a Socialist Party/CNWP meeting. 16 people came - mostly striking UNISON and TGWU members and some PCS activists. We had a good discussion about the cuts being imposed on everyone's workplace, pay and conditions and the need for the trade unions to organise effective opposition.

"The strikers felt the next pensions strikes should be two or three days long and raised some questions about the wisdom of selective action.

"We've been raising the question of building a new workers' party in our UNISON branch for a while. And today's meeting meant we were able to establish it more firmly amongst Southampton council workers.

"Earlier when I visited the picket line at a council depot, the TGWU steward told me he was particularly worried about all the attacks on young people at the moment - the attack on pensions is just part of the story. But he'd done something about it, got young workers into the union and there were several young TGWU members with him on the picket line."

GLENN KELLY is a local government representative on the national executive council of UNISON. He was elected trade union liaison officer at the Campaign for a New Workers' Party (CNWP) conference on 19 March and spoke to the socialist in that capacity.

"I can understand why millionaires give money to the Labour Party - but not union leaders. Millionaires get something in return and it's not just peerages. They get to dictate education policy and win juicy NHS contracts.

"But what have UNISON members got from the millions of pounds that our union leaders have handed over to Labour? Cuts, privatisation and vicious attacks on wages, conditions and services.

"The pensions strike shows that the time has come to stop funding the party that's kicking us in the teeth. It's time for a new working-class party. We aim to have at least 5,000 signatures by the end of the year on our declaration for a new workers' party.

"Help us build a campaign for a party that will defend our pensions and stand up for our rights in the same way that New Labour stands up for the bosses and the millionaires." 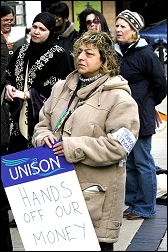 ON THE local government pension picket lines, many signed the declaration in support of the Campaign for a New Workers' Party. New Labour's attack on pensions has made many UNISON members angrily question why their union funds are still going to Labour Party. This anger has now percolated to the union's leaders.

At the last meeting of UNISON's ruling National Executive Council (NEC), North West NEC member Roger Bannister asked if there was any truth in the rumour that the union's Labour Link organisation had taken a decision not to recommend support for New Labour in the municipal elections in May.

The question was greeted with a derisive snort from the chairperson of the Labour Link, who strongly denied any truth in this rumour.

Since then however it seems that harsh reality has struck home even within the barricaded confines of the Labour Link, which carried the following resolution at its last meeting:

"In the circumstances of the union taking national industrial action against the Deputy Prime Minister, John Prescott, named as Regulator and decision maker regarding the Local Government Pension Scheme (LGPS), it is felt that it is not appropriate or politically sensible to be organising, on one hand, for industrial action by the union while sending out letters and leaflets to many of the same members asking them to vote Labour.

"The decision has been taken to suspend our election campaigning work for Labour in the May elections while the industrial action is going on.

"Labour Link will not be giving any further donations or support to the campaign until we reach a solution to the present LGPS issue.

"This is a decision that affects our work for Labour's election campaign in May nationally and locally."

This unprecedented step is clearly welcome and well in line with the actual views of the members whose pensions are being attacked by the New Labour government. But why stop with the pensions dispute? New Labour has privatised schools, housing and vast tracts of the National Health Service. It is time that we used the political fund to support politicians that supported us, and not vice versa! 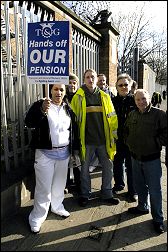 OVER ONE million local government workers joined the one-day strike on 28 March to defend their current pension entitlements. They showed the volcanic anger amongst working-class people against Blair and the Labour government.

Council workers are rightly furious about attempts to strip their relatively meagre pension entitlement when government ministers, MPs and fat cats have protected their sumptuous pensions. Female local government workers get on average £31 a week in their pension packet compared to the £700-plus a week that MPs can get.

This was the biggest co-ordinated strike action for over two decades and a strike that government and union leaders had wanted to avoid.

In March and October 2005 the government, realising the balance of forces weighed against it when two previous pensions' strikes were looming, retreated and ring-fenced existing workers' conditions in the health sector, education and the civil service. Since then it retreated further over firefighters' pensions and gave protection to existing firefighters' pension schemes.

ADDING FUEL to the flames the Blair/Brown government ann-ounced in last week's budget that it was imposing a public-sector pay limit of 2.2% (except for nurses) and carrying out further massive job cuts in the public sector - especially in the Department for Work and Pensions (DWP).

Little wonder then that even the UNISON Affiliated Political Fund (Labour Link) was obliged last week to suspend support for New Labour in the May elections while industrial action continues.

Local government workers need to put pressure on their union leaders to develop a coherent strategy for winning their pensions dispute. At present, the leaders are sending out mixed messages on how the struggle is to be developed if the government doesn't back down after the recent action. 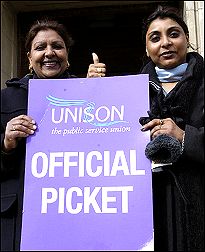 At local level, union activists organised effectively for the strike day to ensure the strike action would bite. At national and regional level, however, union leaders kept inter-union co-operation to a minimum, tried to play the strike down and organised low-key rallies rather than marches to bring striking members of all unions together.

The bigger unions, like UNISON, tried to give the appearance of having a strategy to take the strike forward - including selective action, regional action in April and a further two days of strike action on 4 and 5 May.

The socialist has pointed out before that selective action should only be an auxiliary to more generalised action involving all the workers. In itself, selective action cannot be the way forward for this strike. And, whilst regional strikes and the strikes planned for 4-5 May will be welcomed, there will also be doubts - given the emphasis on selective action - that union leaders have mapped out their current 'strategy' only as an attempt to frighten the government.

Past experience, however, shows that it is more often the union leaders who take fright when the government digs its heels in. Union activists should now demand, following the buoyant mood of the first strike day, that their unions escalate the strike action to two or three days within the next few weeks to build on, rather than dissipate, the mood.

ALTHOUGH THE government was forced to partially retreat last year on pensions, it is clear, given Brown's budget attacks on public-sector workers, that whoever is prime minister in this Labour administration will make further swingeing cuts in public spending and public-sector jobs.

Local government unions should urgently demand that other unions and the TUC give them maximum support by calling an emergency national demonstration on pensions.

The plan announced by British Airways last week to make its existing workers work five years longer for their pensions - along with the half a million workers robbed of their pensions in recent years - shows the urgent need to draw private-sector workers into this struggle as well.

The fight for a decent pension for all workers, as well as defending the public sector, is an ongoing battle that needs to be fought industrially and politically. UNISON members, along with members of other unions affiliated to Labour, should demand that they pay no further money to Labour full stop. Instead their unions should use their money and energy to support a campaign for a new workers' party that will seriously fight for the interests of working-class people.