From The Socialist newspaper, 4 May 2006

THE CAMPAIGN to defend the NHS from government attacks is growing. It has recently been boosted by the decision at UNISON health conference to back industrial action and the magnificent demonstration through Stoke-on-Trent on 29 April. 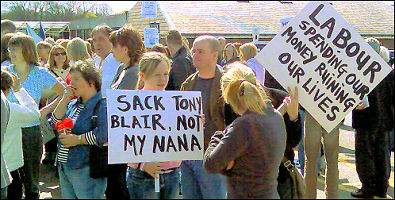 IN THE few weeks since the news of the savage job losses at the University Hospital North Staffordshire (UHNS), the mood of NHS workers has changed dramatically. From at first thinking that nothing much could be done, they are now increasingly demanding no job losses, cuts, closures or privatisation.

Around 5,000 people marched through Stoke on Saturday 29 April. The vast majority of those on the demo were NHS workers incensed at the prospect of seeing 1,200 jobs lost and 160 beds destroyed.

But there were also city council workers, staff from Stoke on Trent college and civil service union PCS members from local job centres. They also face the sack as a result of government cuts.

"Labour, spending our money, ruining our lives", "Cancel NHS debt", "Next step privatisation, stop the rot now" were some of the many placards attacking the Labour government.

Shoppers stopped and applauded the marchers as they entered the city centre. Ambulance drivers and firefighters also blasted their horns to demonstrate their support.

The Stoke Socialist Party banner was the only one from any political party, reflecting the important role played by Socialist Party members locally building for the march and rally.

Independent socialist councillor Paul Sutton drove the lead car in the march and speaking at the rally, congratulated the marchers on "a marvellous turnout". Chris Bourne from the RCN told the rally outside Hanley town hall that: "Nurses are working hours and hours of good will. We aim to bring that trust to a standstill by working contractual hours only".

Socialist Party speaker Andy Bentley received loud applause when he said: "It's a disgrace that my union UNISON, along with others, are handing over millions to the Labour Party, whose government are sacking workers in the NHS, local councils and the civil service all over the country. Workers must demand that their union stop funding these attacks.

"This money could be used instead to help set up a new party to give working people a political voice to defend our jobs, services, pay and conditions which are under attack from Labour and their rich friends in big business." 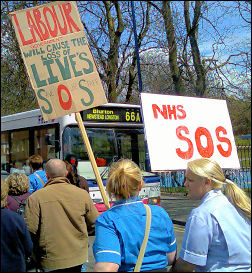 STAFF NURSE Theresa Moore received a tremendous cheer when she explained how her "grandad had marched to help set up the NHS 60 years ago and we need to fight to save it now."

Jim Cessford, Socialist Party member and spokesperson of the North Staffs NHS campaign which organised the march, called on NHS workers to "go back to the hospital and elect representatives from every ward to the NHS SOS campaign. We must make sure it is ordinary workers who lead the fightback."

The government has made a big mistake in attacking the NHS. The vast majority of NHS staff and people across Britain recognise that the NHS is an important gain and are prepared to take action to defend it.

To loud applause, many speakers called for a national demonstration to be organised by the trade unions as soon as possible. But many NHS workers are also talking of the need for national strike action to defend their jobs and NHS services.

Pat Powell, UNISON rep at the UHNS, finished the rally with a message for Tony Blair. "We're giving you a 90-day redundancy notice as from today."

I SECONDED an emergency resolution at UNISON health conference on fighting the NHS cuts. It called for a day of action on a weekday, with national demonstrations. It also called for support and encouragement for branches organising strike action on that day. It was carried unanimously.

Patricia Hewitt did a really good job, saying that the NHS has never had it so good the day before the conference. Everybody was really angry!

The whole mood was for unity in organising opposition to the cuts. All it takes is two or three areas to organise industrial action ballots - that will get publicity - I think it will take off like wildfire.

Now we've all got to make sure that the day of action takes place and, when it does, we must do everything possible to mobilise for it. 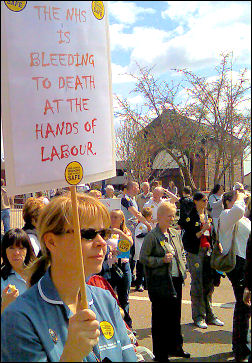 OVERALL, THE UNISON health conference reflected the demand from members for more action in defence of jobs and services. The motion seconded by Adrian O'Malley (see page 1) summed up the mood for national action. Members will now be expecting the section executive (SGE) to deliver.

Two resolutions were passed against SGE recommendations on the pay and conditions agreement, Agenda for Change (AfC). The first said too many issues were being left to local negotiation. The second called it a "disgrace" that no progress had been made on the production of the list of items which had been in the old 'Whitley' terms and conditions which weren't in AfC.

A motion critical of the submission to the pay review body was passed against the SGE recommendation. It said future pay submissions should be based on policy agreed at health conference and subject to consultation with branches and regions etc.

Unfortunately the resolution condemning the executive for its handling of the 2005 pension agreement fell because a weaker one, supported by the executive, was passed. Even so, there is a lot of concern amongst members about the agreement and the effect on new employees.

Even the weaker resolution instructed the executive to ensure that "all new NHS starters" are able to access their pensions at the same age as existing scheme members without detriment.

Throughout the union, members are saying "enough is enough" and now its time for the union to deliver.

US students say 'education not war'