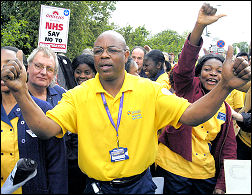 LIKE MANY other hospitals, Whipps Cross in east London is threatened with huge job cuts and closures of wards and theatres.

The government's drive to force hospitals and other healthcare trusts to "balance the books" is putting the very future of the NHS into jeopardy. It's part of their plan to invite big business vultures to pick over its most profitable parts.

UNISON joint branch secretary Len Hockey, spoke to the socialist about the cuts being proposed at the hospital.

"Cedar Ward, an elderly care ward, is due to close this week. They try to justify this by saying there are other healthcare facilities in the community. But the Primary Care Trust is proposing to cut 25% of district nurses!

Now the trust is consulting about the closure of Patience Ward, a urology ward. We're beginning to wonder whether we're going to be faced with a drip drip drip of cuts and closures, rather than one dramatic announcement.

There is anger amongst the staff but also a certain amount of fear as well, as people wonder whether their job will be under threat.

This can harden into a mood of militancy. But the key to it all is getting the unions nationally to harness some of the energy and anger in campaigns around the country and provide a national focus for it. That is desperately and urgently needed.

We're calling on people to join the campaign and involve as many of their family and friends as possible. People must get actively involved and push wherever they can, through their trade unions etc, for national, co-ordinated action.

The accountants and managers employed to look for cuts at the hospital are proposing changes which haven't been thought through properly. For example, some maintenance workers have had their mobile phones taken away, which makes them less accessible and less responsive.

Drivers employed by the hospital trust collect important post and specimens from around the area to be taken to the hospital lab. They are based in the postroom.

Other staff in the postroom are employed by Initial, who want to reduce the number of postroom workers.

At the same time staff are being told they have to cover for people off sick and on annual leave. So mail is being left unprocessed and managers are coming in trying to sort mail.

This can include important test results, so you can see how patient care can be compromised.

We pushed for national action at the UNISON conference. During the debate on the health conference I made the point that we have a responsibility to future generations to defend the NHS."

Waltham Forest Save Our NHS