From The Socialist newspaper, 6 July 2006 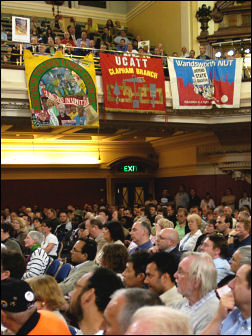 THOUSANDS OF public-sector workers met on 27 June to lobby their MPs over the mass privatisation of public services.

Under the slogan of "Public Services Not Private Profit", 15 unions came together to organise the lobby and rally, initiated primarily by the PCS civil service union.

Hundreds waited in Central Hall Westminster for their turn to tell their MPs what they thought about the scandal of their jobs and services being handed over to the private-sector fat cats.

Disgracefully, the TUC had refused to support the lobby. Even worse, the 'big four' unions - UNISON, TGWU, Amicus and GMB didn't either.

At a meeting of the UNISON NEC before their recent conference, it was claimed that because the lobby had not gone through the TUC and that it had been called by left Labour MP John McDonnell, they could not support it.

But PCS general secretary Mark Serwotka explained from the platform that they had raised it with TUC leader Brendan Barber. And it was: "sad that the TUC was not here today".

The reality is that the TUC, along with some of the other union leaders, do not want to be seen as following in the wake of the PCS and its socialist leadership. 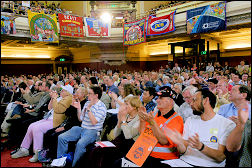 UNISON general secretary Dave Prentis in particular, following on the debacle of his failure to win the same pension protection for his local government members as won by the PCS and other unions, feels the criticism of his members.

This has further irritated many UNISON members, who see their union giving millions to the Labour Party "to gain influence with the Labour government". Yet many of the unions who have won full protection for their existing members' pensions are not in hock to the Labour Party in any way.

The 'big four' unions are affiliated to the Labour Party. They are throwing their weight behind Gordon Brown's succession to Blair's crown. They are also coming up against a certain pressure from those in the unions who think that the unions should not back Brown, who is seen as no different to Blair and instead find a left candidate to stand against him.

It was clear that some of the platform speakers would want someone like John McDonnell to stand against Brown. He is the high-profile chair of the Campaign group of Labour MPs and a parliamentary spokesperson for many of the left trade unions. 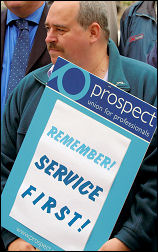 But McDonnell wouldn't be the only choice. Others talk of people like Michael Meacher.

Meacher, who spoke at the rally, made it clear that he was promoting himself. His speech was nothing less than his manifesto. He called for an independent foreign policy not tied to Bush. He supported the 'fourth option' in housing - keeping council housing under public control.

But like McDonnell or whoever, assuming they are not subject to Labour Party witch-hunts, he would still be prisoner of the Labour Party machine and unable to give the working class back its own voice in any real sense.

Matt Wrack, FBU general secretary, came the nearest to saying that the answer wasn't in the Labour Party when he said that: "There has to be a political challenge to the neo-liberalism of the Labour government". But he did not mention that his union had broken from Labour as result of the government attacks on the FBU. 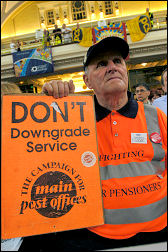 Mark Serwotka raised in his speech that the battle against privatisation cannot stop with one lobby. He called on the TUC to call a mass lobby and demo in London in the autumn.

Following that there should be: "a co-ordinated day of action across the country, with workers demonstrating outside every school, every hospital and every part of the public sector to show that it is not for sale".

Trade unionists speak to the socialist

CHRIS NEWBY spoke to public-sector trade unionists as they waited to lobby their MPs.

Sheila, from the HMRC (Revenue and Customs) east London branch told the socialist:

This morning it's taken me over two hours to get into central London from an east London borough. So anyone whose office is closed will either get moved further into London, with the nightmare of commuting, or get moved out of London with less pay and an even longer journey.

I think we should have a one-day public-sector strike to defend public services. People who aren't really big strike fans are coming round to the idea that we're going to have to do it."

When Chris asked: "What do you think about our campaign for a new workers' party?" Sheila replied: "I've got the stuff, I've bought the book and made the donation! I think the Labour Party doesn't represent the workers any more."

"I've come to stop the NHS being privatised. It's draining money away and that shouldn't happen. PFI means hospitals will be 30 years in debt.

I've been a home help for over 25 years and I've seen the service deteriorate. The clients used to get four hours a week with us, now they get an hour and a half a fortnight. And soon it will all be done through an agency, so that's privatisation.

Everything we used to do is being stripped away from us. The shopping service was taken away. Clients used to have a nurse come in to bath them, now they have to pay for that. Where's it going to end?

I think a one day public-sector strike would bring this to more people's attention. It would sharpen their minds."

Carole from the Probation Service in Sussex explained:

"There's a lot of people here from the Probation Service and from the Prison Service as well. Higher management have been gagged by the Home Office from exposing what's going on. Morale is terrible and we're constantly being attacked, even though we meet all the targets which the government arbitrarily sets. We're performing better than ever, yet that's not good enough. We're being put out for "contestability" which is privatisation is anybody's language.

A one-day public-sector strike is the direction we should go in. Where are the TUC, they're not here today? They should be behind us all the way and a one-day day of action would show parliament that we really mean it.

I don't think any of us ever believed that the Labour Party would go the way it has - out-conservating the conservatives. They're more right-wing than most right-wing parties. There's nobody now who stands for what used to be called old-fashioned Labour values. I think that campaigning for a new party is a good idea. There's room for another party for people who were once the bedrock of the Labour Party but now have nowhere to go."

"We deal with NHS pensions, which is currently under the threat of privatisation. We'll fight to retain the service in the public sector, which is the whole intention of today.

If privatisation goes through, we'll definitely see a deterioration in our terms and conditions. These companies are looking for profits all the time rather than a quality service.

Privatisation is a big threat to us but it's also a big threat to NHS workers whose pensions are under threat. I believe we need a new party. The far-right policies of Maggie Thatcher's government have now become central to both parties' policies."

Andrew, a PCS rep at the department for Constitutional Affairs:

"The department has informed all its staff that efficiency savings have to be made. I'm very concerned about the impact this will have on the staff and the public. Public services shouldn't be run for private profit.

When all public-sector unions stood together we got much better results than standing alone. I'm sure my members will support a one-day public-sector strike."

NHS: Not for sale!

The NHS: What the Socialist Party says

Build the Campaign for a New Workers' Party

How the rich became super-rich

The Wind that Shakes the Barley

Preparing for the showdown