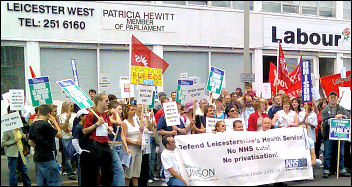 HEALTH SECRETARY Patricia Hewitt hid from protesting health workers and patients from her own area last Saturday, 8 July. 300 people took part in the march in Leicester in protest against health service cuts and privatisation.

The march went to Hewitt's Leicester West constituency offices where a public surgery had been advertised. However, when we got there the doors were padlocked and no one was in!

At the rally at the end of the march, Leicester Trades Union Council secretary Paul Henderson said that Hewitt's office was sandwiched between a bankrupt stock warehouse and an engineering firm called "Premier Screw and Repetition Company": "Her ideas are certainly bankrupt, and her government is repeatedly screwing us!" 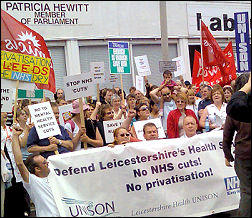 The demo, supported by Leicestershire Health UNISON, had been initiated at short notice by workers at one local mental health unit, the Rutland unit (under threat of closure), and another, Stewart House, (threatened with privatisation). These are just part of at least £62 million cuts being made in Leicestershire.

Speakers at the rally included Socialist Party members Josie Nicholls, branch secretary of Leicestershire county council UNISON and Jean Thorpe of UNISON NEC. Along with other speakers such as Tom Smith, steward at Stewart House, they raised the need for national action to defend the NHS, along with a national demonstration.

Jean pointed out that "the millions of pounds given to Labour could instead be used as a strike fund for national action of NHS workers!"