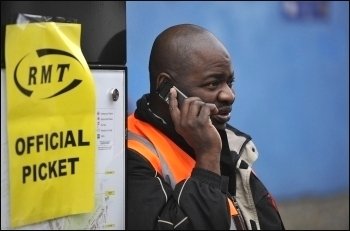 RMT is currently organising discussions with others on taking part in a coalition, photo Paul Mattsson   (Click to enlarge)

"Savage cuts needed". This refrain sung by Nick Clegg at the Liberal Democrats' annual conference is going to be repeated, albeit in different keys, at both the New Labour and Tory conferences. All the establishment parties accept the logic of capitalism, therefore demanding that working class people and public services should pay the price for capitalist crisis and bankers' greed.

Anxious to add his party's voice to the 'slash and burn' frenzy, Nick Clegg has abandoned the few policies which made his party appear fractionally to the left of the big two; particularly the pledge to abolish tuition fees for students.

Leaders of the Liberal Democrats have expressed outrage at Tory leader David Cameron's declaration that there is barely a cigarette paper's breadth of difference between the two parties' policies but this is merely a statement of fact.

Beyond the general election a Tory-Liberal coalition is possible if the Tories do not achieve the majority they are hoping for.

New Labour prime minister Gordon Brown used his speech to the TUC congress to 'reveal' the open secret that Labour too plans to make drastic cuts in public spending after the general election.

The TUC leaders recognise that a Tory government would be a disaster for the working class. For the majority of them, however, the only way forward is to continue clinging to the coat-tails of New Labour.

The biggest trade unions in Britain have handed over many millions of pounds of their members' money to New Labour. The CWU alone has handed over £6 million since 2001. Yet its members in the Royal Mail are currently being forced to take strike action against an onslaught of attacks designed to prepare Royal Mail for privatisation.

Brown has presided over a public sector pay freeze and the slashing of tens of thousands of civil service jobs. At the TUC he made it crystal clear - using the word 'cut' four times even in one sentence - that a future New Labour government would also decimate public services.

Rank and file trade unionists are increasingly unwilling to accept that their money should be used to fund a party which is attacking their pay, conditions and public services.

In London, CWU members have organised a regional indicative ballot over whether the union should continue to give money to the Labour Party. In the PCS, which does not fund New Labour, members are going to be consulted over whether the union's political fund should be used to back trade union candidates in opposition to New Labour in future elections.

Of most immediate importance, the RMT is currently organising discussions with others on taking part in a coalition that would stand trade union and left candidates in the next general election. The RMT has called a potentially important conference to discuss the relevant issues on Saturday 7 November, in London.

Despite the present political limits of Die Linke, it is winning support by standing in defence of public services and for withdrawal of troops from Afghanistan.

In Britain, a trade union backed left coalition would mark a significant step forward in the struggle to create an independent voice for working class people.

It could stand candidates that argue for a socialist programme and demand that working class people do not pay the price of the capitalist crisis.

Such candidates would stand in stark contrast to all the establishment parties, and would play an important role in giving confidence to the struggle to defend public services, which will be crucial after the general election, whichever of the axemen is prime minister.