Tory shadow chancellor George Osborne's plea for equality of sacrifice - "we're all in this together" - unravels when the real impact of his pension proposals becomes clear. 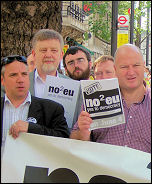 For working people, with only little or no access to a company pension, the state retirement pension is a wholly inadequate income - but it's one that Labour and Tories alike feel happy to steal.

By bringing forward by ten years Labour's plans to raise the age at which the state retirement pension could be claimed for men from 65 to 66 (and slightly later for women as well), Osborne was trying to give the impression that here was a sacrifice to help restore the market economy which would affect everyone equally. 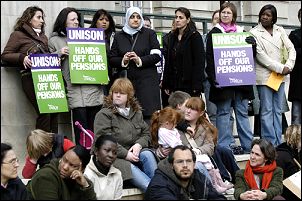 When fully in place the government would 'save' £13 billion a year by not having to pay a year's state pension (worth just under £5,000 to each person) and by increased tax revenues from those forced to work an extra year. But the proposal does not affect everyone equally.

In the area I represent in Coventry, St Michael's, the average age at which men die is 65; in the next-door ward, Earlsdon, represented by the Tories, it is over 77. Raising the state retirement age to 66 is saying to the 'average man' in St Michael's: 'work until you drop'.

And pensions are just one area of public services under threat. Many local councils are already planning swingeing cuts. For example, on 20 October Coventry councillors will decide on plans to cut £72 million from council spending over the next three years.

At almost 9% of the city's budget there is no way that our essential local services, and the jobs of hundreds of council workers, will not be affected. But it could get even worse...

Whoever wins the next general election is planning more cuts in local services; the only argument between the big three parties is about who can be the most "bold" or "savage" in cutting public spending. Those cuts are designed to make working people and our families pay the costs of the crisis in the economic system. But that crisis was caused by bankers, with their bonuses, playing casino economics - working people should not have to pay their price.

The Tories may talk about us 'all being in it together' facing this crisis, but they and their rich friends will be all right. £72 million of cuts will bring real hardship and pain to ordinary people in Coventry.

If they can get away with it similar pain will be exacted in all local authorities. Council workers will have to fight for their jobs, but all trades unionists and our families rely on the services that council workers provide; we must build a joint campaign to defend public services.

Help build the campaign for a socialist alternative and for a trade union based electoral challenge to cuts and unemployment.

Organised by local trade unionists and supported by Coventry TUC.