Defend jobs, no to increased workloads 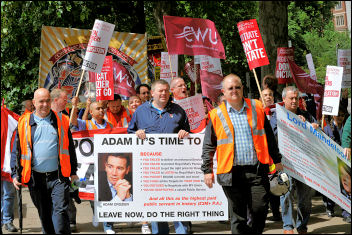 In a national ballot, 76% of postal workers have voted to strike. This is whilst hundreds of local strikes continue throughout Britain, from the Isle of Wight to the highlands of Scotland. These strikes are a result of the most sustained attack on postal workers for decades.

This flows from the unsatisfactory outcome of the last national strike in 2007, against management's imposition of new working arrangements and low pay.

Postal workers now are fighting against the same thing. But with the added twist that Royal Mail management, with the full backing of the Labour government, are out to break the CWU as a fighting union.

In 2007 the strikes ended with a deal where the union allowed the bosses to begin the process of 'modernisation'. But this gave the bosses the opportunity to impose more and more work on fewer and fewer shoulders.

As we go to press, the Communication Workers Union (CWU) have announced that they are not taking a decision about strike action until 15 October. The union leadership is obviously worried by Royal Mail's threats of legal action if they call for a national strike.

But it would be fatal for a leadership to vacillate at this time. What is required to defeat the bosses is decisive action.

A 24 hour national strike of all the CWU members who work for Royal Mail is the way forward now. If the union is challenged in the courts then they should defy the law and call upon the whole trade union movement to support the CWU - not only in their fight against the bosses but also the anti-trade union laws.

Mandelson in the Labour cabinet has been encouraging the bosses to smash the union. He was frustrated that his plans for privatisation earlier this year failed.

But what we have now is all the worst aspects of a privatised Royal Mail anyway.

The post bosses want to make the industry attractive to the private profiteers. What stands in their way is the CWU with its layer of activists.

It is not an accident that the management has singled out the activists for attack.

The union leadership has a duty to ensure that, with the backing of the members, they take the fight to the employer. The CWU should call for maximum unity of all unions against the government proposed cuts in jobs and pay in the public sector.