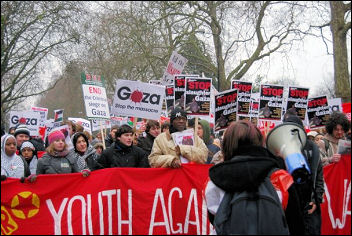 LAST WEEK'S announcement that US president Obama has been awarded the Nobel peace prize is astonishing considering his intentions to continue the war in Afghanistan.

After eight years of the war, with growing numbers of deaths of occupying troops as well as the slaughter of Afghan civilians, there is no 'solution' in sight. Obama is now considering whether to massively escalate troop levels. This is over and above the increase to 69,000 already planned by the end of this year.

Obama risks being compared to another famous Nobel Peace prize winner - Henry Kissinger, US secretary of state under president Nixon, who was associated with the Vietnam war and the bombing of Cambodia!

US General McChrystal has submitted a report saying that their mission will fail within a year without 20,000 to 40,000 more troops and a long term commitment to stay. Gordon Brown is apparently sending at least another 500 troops after a telephone conversation with Obama. 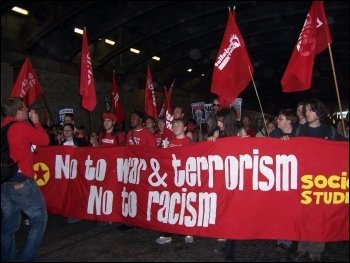 Yet this option would mean sinking further into the quagmire that is Afghanistan. It would mean even more deaths, and raises again the memories of the US defeat in Vietnam. The latest number of US military deaths in Afghanistan is 792; the UK death toll has reached 221.

A new survey has shown that the British death rates per thousand troops doubled over the summer and are as high as those suffered by the Russians who were defeated in Afghanistan in the 1980s.

There are no reliable figures for the deaths of Afghan civilians but estimates say at least 1,500 have died so far this year alone.

Alternative proposals from vice president Joe Biden are for an emphasis on "counter-terrorism" and strikes on pro- al-Qa'ida groups inside Pakistan. He does not see the Afghan Taliban as a "direct threat" to the US. However, even he does not propose troop reductions.

56% of British people oppose the war according to the latest BBC survey. People are asking: 'What is this war achieving?' If it was really to build a "stable nation" and democracy, then it is clearly a long way from that goal.

The recent presidential elections in Afghanistan have shown the corruption of the Karzai government with widespread ballot fraud. European Union observers said a quarter of the votes cast could be fraudulent, including some areas where the turnouts were apparently over 100%! The country is being ruled by a combination of warlords, the occupying forces and a corrupt government.

For the vast majority of the population the huge levels of poverty, unemployment and hunger are on the rise. Clean water, sanitation, power and services are not available for most people. The promises the western powers made to them have not been delivered.

The occupation has not got rid of groups like al-Qa'ida on a world scale, nor eliminated terrorism. In fact it has fuelled the Taliban insurgency and religious extremist groups across the region.

It has not been in the interests of the Afghan people, or in the interests of ordinary people in Britain or any of the Nato countries. Despite the enormous cuts in public services being threatened by all the main political parties in this country after the election, they would all continue to pour vast amounts of money on top of the billions already spent on this war.

We call for the troops to be withdrawn. The solution lies with the mass struggle of the workers and poor of the region, for a socialist solution to the problems of poverty and violent conflict.

Called by Stop the war Coalition, CND and BMI.