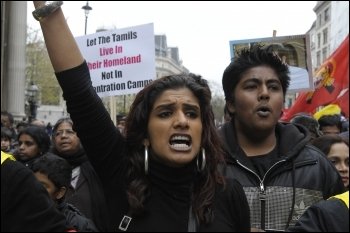 Protesting against the Sri Lankan government's attacks on Tamils in April 2009, photo by Paul Mattsson   (Click to enlarge)

The Sri Lankan government's war on Tamil people's basic rights continues. Around 300,000 men, women and children remain incarcerated in camps under the most horrific conditions, months after the official ending of the war. The internally displaced people (IDP) in Sri Lanka are being treated horrifically by the chauvinist government of president Mahinda Rajapakse.

The decades-long war between the government and the separatist Liberation Tigers of Tamil Eelam (LTTE) ended on 18 May, with over 20,000 people massacred in the last weeks alone.

The British government, which has blood on its hands for its role in Iraq and Afghanistan, gave support to Rajapakse's war. Trade links with Sri Lanka have been prioritised over the lives and rights of hundreds of thousands of people.

On 6 October 2009 Mike Foster, New Labour's development minister, said: "Conditions in the camps have improved since my last visit". Now he has announced that Britain will be cutting its aid to Sri Lanka. So far no effort has been made to ensure that the aid is given to the IDPs - instead it has been reported to be in the pockets of corrupt government officials.

Spending on the military 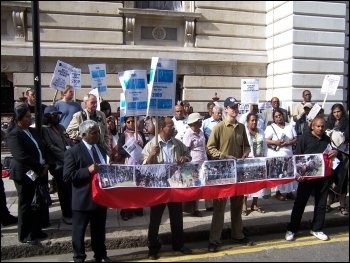 Following this announcement the Sri Lankan government has also announced that they will be cutting spending in the area. Yet it has approved a 20% budget increase for the country's military for the remainder of this year. Surely it can improve the lives of these people by investing a fraction of the millions they spent on war on reconstruction?

We cannot rely on the New Labour government to come to the assistance of the suffering Tamils. The Tories and Liberals are no better. In May Des Browne, New Labour's special envoy, said: "We visited the IDP camps in Vavuniya. We saw the considerable efforts the government is making to accommodate and assist IDPs who have left the conflict zone." But in the same month the BBC described the conditions in the so-called 'welfare camps' as a "vision of hell".

Since then the situation has deteriorated. More than 15,000 people are reported to be missing from the camps. The majority are probably held in interrogation camps elsewhere. At least 40 people die every day. There is no reason to keep these innocent people in the camps, the majority of whom are children, women and elderly people. Over 35% of the imprisoned children under the age of five are said to be suffering from malnutrition.

The Sri Lankan Times reported that a group of MPs is making millions from smuggling out the IDPs, at a reported cost of 600,000 to 900,000 Sri Lankan rupees per person released.

Anyone raising dissent in the country is either attacked, imprisoned or killed. More than 12 journalists have been killed in Sri Lanka since 2006. Many more have been attacked and imprisoned.

If it was not for the brave action of Tamil youth and activists protesting on the streets around the world this massacre would have gone unnoticed. We must not stop campaigning. Despite the government boasting about 'victory' and 'saving the people', they suffered a defeat in Vavuniya, the site of one of the largest camps, in the last election. It was a clear signal from the people about what they think of the government.

Despite the horrific conditions and constant fear, there were reports of riots in the camps. It is more important than ever that we continue the fight against the brutal regime in Sri Lanka and the British capitalist parties who will never stand up for the poor here or anywhere in the world.

Lessons have been learnt during the brave demonstrations and activities and it is time now to discuss the right way to continue. We should not rely on rotten international organisations such as the United Nations (UN) who will just be a stooge to the oppressing governments. Despite overwhelming evidence and the condemnation from almost all the humanitarian agencies, the UN refuses to take any action. In fact it passed a resolution clearing Sri Lanka from any human rights violations! The UN will never represent the interests of the poor and oppressed Tamil people.

Fight against the capitalist class

Western governments, including Britain, have done nothing meaningful. The fight for our rights is a fight against the capitalist class in Sri Lanka and around the world. Tamil Solidarity is organising the fight against this oppressive class. We are working with the Socialist Party of England and Wales and its sister organisation in Sri Lanka, the United Socialist Party.

Both parties fight to change society for the benefit of all. The United Socialist Party (USP) is the only party in Sri Lanka now standing for the right of self determination, up to and including a separate country, if it is what the Tamil-speaking people in Sri Lanka want. And the USP is the only alternative force in Sri Lanka that stands for the rights of minorities, and continues to fight despite the intimidation and death threats from Rajapakse's thugs.